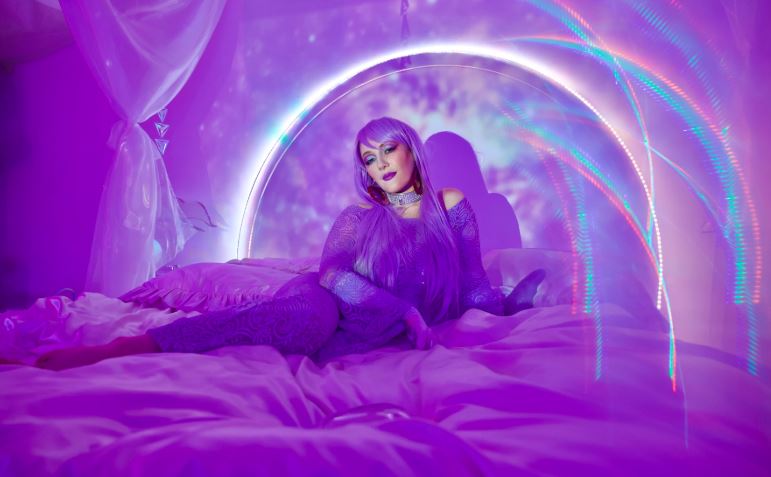 Having carved out a reputation for live performance under previous names Sargasso Sea and Zyna Hel, but despite the title changes, the music’s remained consistent. Lindsay Corr had a socially distanced catch up with Elisabeth to find out more about the record, described by Elisabeth as ‘if Erasure had a baby with Diamanda Galás; songs from a different universe that slipped into this one.’

Your debut album has just been unleashed into the world. How does it feel?

It feels really good, I hadn’t realised the relief I would feel! I feel like I’ve been tense from the moment I started recording it. I’m a focused person and was constantly in that creative space so it’s great to finally put it out.

I’m very driven by making, I come from an art background, so my whole drive is just make the work and don’t think about how it’s gong to be perceived, but I’ve been quite shocked by how it’s been received. I wasn’t expecting people not to like it but equally I wasn’t expecting such an outpouring of love and positivity, it’s been really nice! And it’s such a strange time, to be able to have a feeling of connection through this album is great.

Speaking of strange times, were there hesitations about releasing amidst Covid-19?

It’s helped in some ways and hindered in others. It’s impossible to tell what would’ve happened without this going on or if I’d waited, that’s why I chose to just keep on my plan because we don’t know how long we’ll be in this position. Also, people have been having a really rough time and the record is positive, so I wanted to put it out now to give people something uplifting.

The 10 track album merges poetically potent lyrics with upbeat tempos exploring love, loss and desire, can you elaborate on your double layered sound?

I don’t feel like it’s conscious, I can’t control too much. I can edit, but when I write a song it just comes out the way that it is; I feel like the song already exists and I just have to pull the thread. A lot of the music I love has those two elements existing together – the joy and the gloom. Something that has energy and makes you want to dance but is also heartbreaking at the same time.

Was it difficult to decide which tracks made the cut?

It felt choosing certain kids to come on a trip and leaving others behind! In the end it was quite intuitive. I don’t know why, but these just felt like the

songs that needed to be on this record, if I tried to bring another one in it didn’t work. I doubted my decisions but I’m glad I stuck with my gut and kept it succinct. I wanted it to make sense and not just be me dumping all the music I’ve made into one thing.

How does the femme witch persona play into your writing process and performance alter ego?

I’ve always been into magic and the occult. I remember this shop in Newcastle, I used to get the train through every Saturday when I was about thirteen and spend all day there, I was obsessed. From a young age it’s the way I’ve found out about myself. It’s not the only part of me and maybe in the future that’ll shift as I move forward. For a long time, I tried to hide it. It felt just as hard coming out as a witch as it did as a bisexual. I felt, and still feel, that fear of what people are going to think about me when they read I’m into the occult and mystical experiences feed into my art. Are people going to mock me?

In creative spaces, spirituality is often ridiculed, so I’ve often wrestled with that, especially as a female artist. To be able to put something out which has some quite overt mystical themes and for it to be well received is really cool!

Your aesthetic is striking. Was this look a conscious decision or did it happen organically?

Aesthetic has always been important to me. I was dark, goth, other-worldly when I started, and I wanted to bring in more colour but wasn’t sure how. Then I found Marina Fini on Instagram and thought she was incredible, so I private messaged her and we became friends. She’s had a really big influence on the visual world the record inhabits. She immediately got my songs which helped the look come organically between us.

Do you have a favourite track from the album?

I love them all! I really love ‘Obsidian’. I don’t know, I love ‘My Sisters’ too, and ‘I Am the Love’; but ‘Obsidian’ has a special place in my heart. I think it’s one of the best songs I’ve ever written because I feel the most emotional connection with it.

You are known and praised for your live performances. Are you missing it?

Yes, and I wish I could be playing these songs live right now. My launch would have been 13th May, so it’s a bit sad, but it can still happen after all this! I tried live streaming and I find it weird not having anyone there to connect with, but I can’t turn off being creative, so I’m using the time to record, keeping myself focused on solidly escaping through music!

Will there be more singles/videos from this collection?

Yes, three things – one is an alternate version of a song that I’ll put out in June. Then there’ll be videos for ‘Hieroglyphic’ and ‘I Am the Love’, and they’ll come out when it feels right.

Do you find it easy to move on and create new material?

I could honestly write and produce songs every single day, it’s what comes most naturally to me. If anything, making them into albums is the hard thing. If I were to follow my natural rhythm, I’d be releasing a song and video each month, to feed that constant creative drive. But songs can and do belong together, it can make sense and I felt that putting Mercurial together. And my job now is to work out from all the new material which songs want to be together.

You can listen to and purchase Mercurial via Elisabeth Elektra’s Bandcamp page.