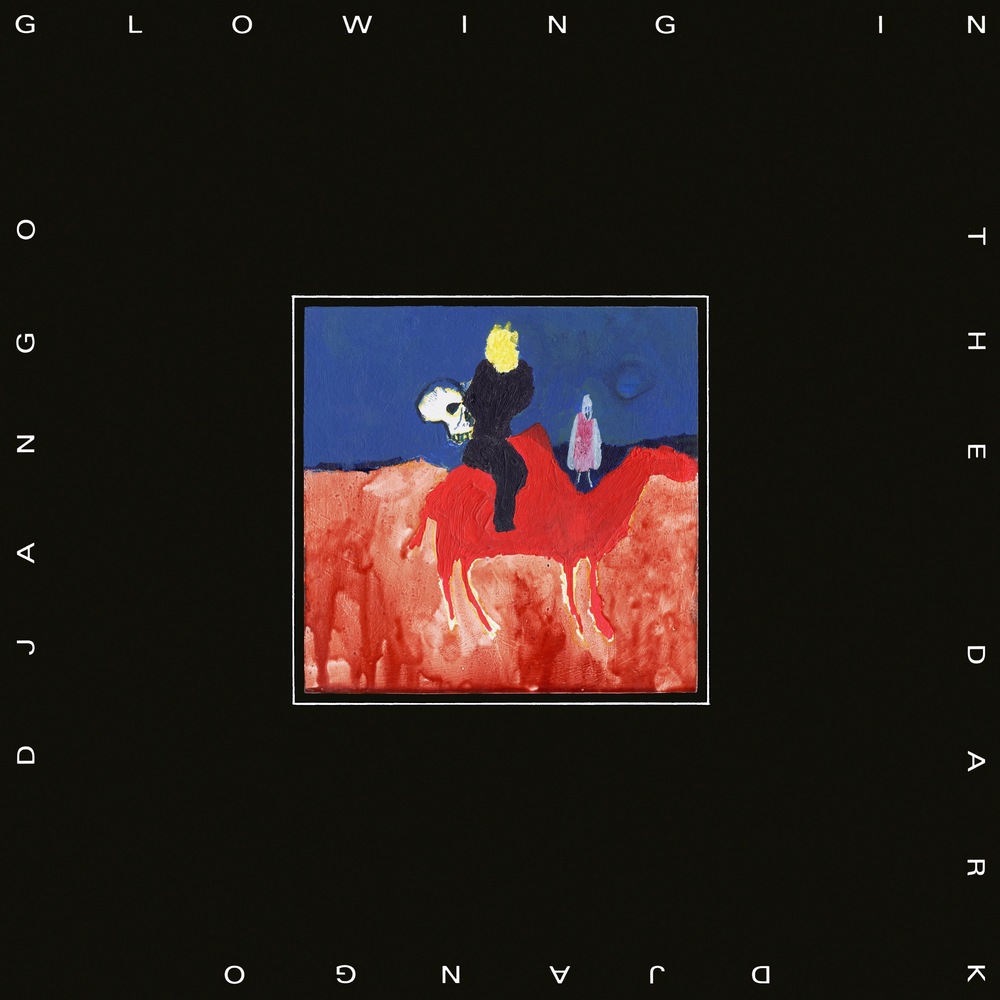 The identity or character of Django Django is about as straightforward to nail down as a serpent covered in a specially formulated nail-proof butter. Having met via Edinburgh College of Art and formed the band in London, while hailing from pretty much all four corners of the UK, they even resist geographical pigeonholing. All the while, the maelstrom of eclectic influences that goes into their sound presents a challenge to reviewers, as any attempt at defining their sound in simple words becomes a vague list-making exercise.

That being said, the band’s output is hardly challenging to the point of unlistenable. The dense mesh of Django Django’s musical heritage manages to settle in a broadly laid-back fashion. The one exception to this was possibly their second album, 2015’s Born Under Saturn, where brash mixing meant some songs were overpowered by individual bleepy or splashing elements.

Glowing in the Dark flirts with this gung-ho level mixing approach, but there’s an overall feeling of restraint to the record which, when aligned to the songwriting – some of the most mature and heartfelt the band have ever produced – makes this bubbling record a potential career highlight on the theme of escape. Escape from life, the planet, convention – anything – is surely going to resonate with almost everyone after these last 9 months.

As an opening track, ‘Spirals’ is a real signal of intent. A bold, rising synth joined by squelchy bass, and very clean guitar, merge in a pleasing intro that quickens its tempo until the whole band joins in. The chorus is way more hummable than the chord sequence than it has any real right to be, and the solo section after the four-minute mark benefits from a relatively non-distorted guitar line which shyly transitions into a synth-heavy outro.

‘Right the Wrongs’ has a distinctly early Eighties feel. Subtle dynamic shifts reminiscent of Wire and other New Wave acts are offset by Vincent Neff’s vocals, which still straddle the no-man’s land between falsetto and regular registers with an airy sense of ease.

The rhythm guitar in ‘Got Me Worried’ is my favourite element in the track. The emphasis is squarely on rhythm as staccato chops of compressed (with a touch of wah) barre chords drive a palm-muted train-like time signature.

Charlotte Gainsbourg features on ‘Waking Up’ and the song is a predictable high point. The chorus encourages bopping in even the most toe-tap-averse and the middle eight is exactly where you want it to be. Three minutes of pure, vibrant, old-fashioned pop.

‘Free From Gravity’ transports the listener to an interstellar soundscape and it’s hard not to imagine skirting the curvature of a remote planet, even if the lyrics very pointedly refer to Earthbound items. The synth in the chorus is somewhere between a conventional coda and the bleepy bit from ‘Pocket Calculator’ by Kraftwerk. The bass manages to retain an organic feel, despite the effects used, and the breakdown version of the chorus towards the end hits a real elemental sweet spot.

‘Headrush’ is centred around a driving mix of bass and drums with an off-beat snare hit. Along with the drum machine, this provides an ideal song to accompany some quite aggressive walking, should you need accompaniment to your aggressive walks.

Instrumental ‘The Ark’ could be seen as filler, armed as it is with swooping synth lines and subtle dynamics. I disagree, however, and would actually have liked it to have been twice as long, keeping the synths diving like hungry ospreys for another three or four minutes.

‘Night of the Buffalo’ feels like a triumph of song construction. Snare-heavy rhythms in the verses give way to a chorus which feels like it’s trying to cram several superfluous chord changes in, and there’s a distinctly Middle Eastern tilt to the bridge. It’s a song which probably shouldn’t work, yet strangely I feel it’s all the more organic-sounding for its Frankenstein-style composition. The bits of the song that seem contrary to the previous section are the bits that become all the more rewarding on repeated listens.

Shortest track on the album, ‘The World Will Turn’ is a folky, acoustic number that wouldn’t have suffered from being twice as long or from kicking into heavy instrumentation. ‘Kick the Devil Out’, which follows it, is a breezy jaunt heavily reminiscent of Altered Images and Orange Juice.

From here on out, the last three tracks are highly electro-influenced. Title track  ‘Glowing in the Dark’ starts with a drumbeat that isn’t a million miles away from the type of thing Laurent Garnier would stick on as a ‘one more tune’ at 4am. The sampling of Neff’s voice for the stuttered refrain never feels like a gimmick and binds perfectly with the techno-style layer sequencing.

‘Hold Fast’ follows with its rumbling tom-led drumbeat, constantly threatening a time change that never appears, while the final track, ‘Asking For More’ displays the now familiar restraint and brevity referred to earlier. The track could easily morph into a noisy end-of-set noisefest, but instead settles for embellishing the base track with one of the most satisfying squelchy noises you’ll ever hear, duelling with a calm organ for its final minute.

Glowing in the Dark is possibly the best thing Django Django have produced thus far, and it’s all the more impressive when you think of all the buzzing excesses that could’ve been thrown into the mix on half the tracks here. Overall, it’s a triumph of composition over compilation.

Most reviews of Drenge over the years have focused on the noise, anger and ...

The last couple of years or so have been heaven for fans of classic ...