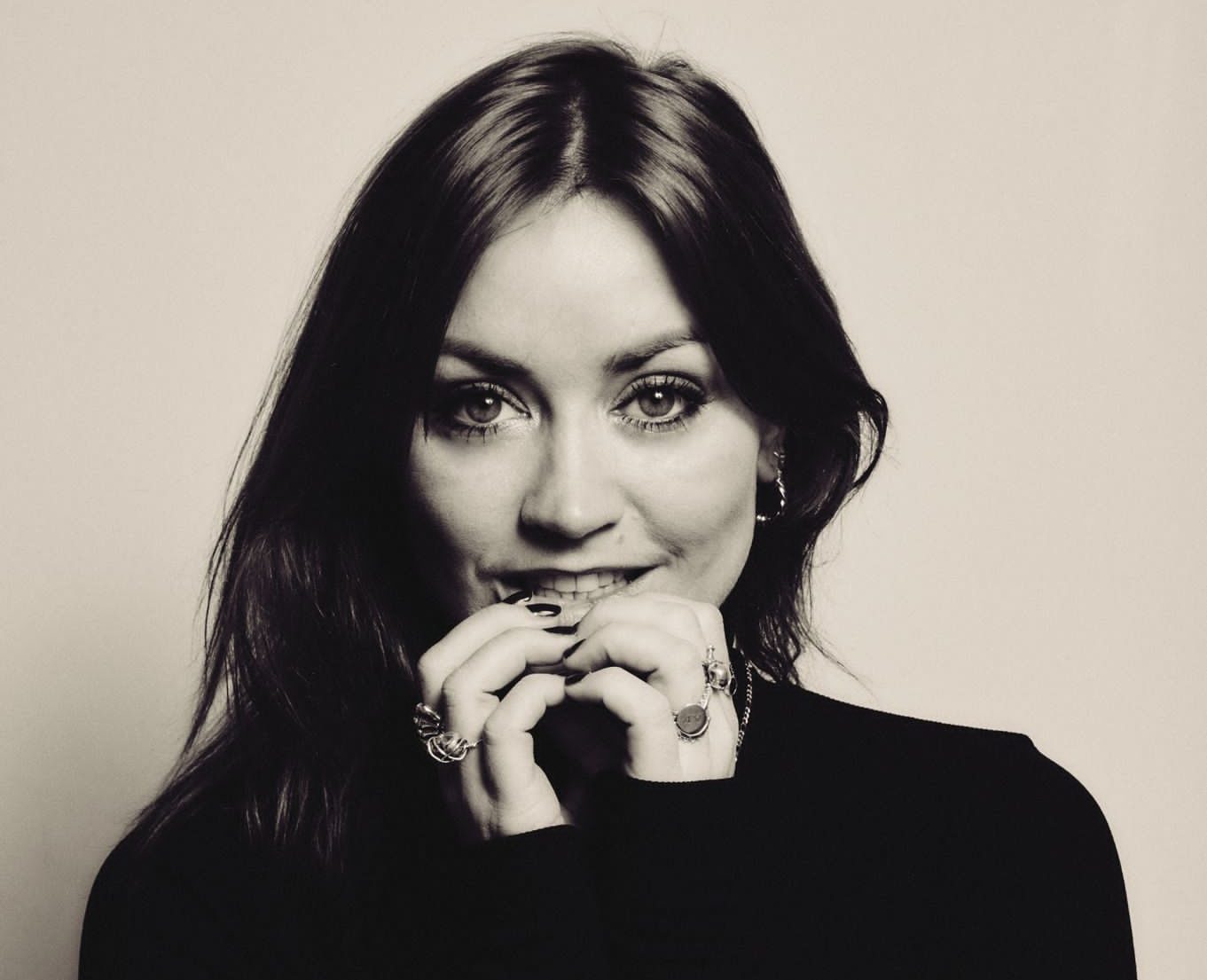 It’s exhausting enough reading about the gigs and shows Arielle Free is doing this summer, let alone actually doing them. Mind you, we’ve all waited long enough to get out of the house, so you can’t blame anyone for filling their diary to bursting point!

SNACK had to grab a quick chat with one of the hardest working Scots in showbusiness.

You’ve two big Scottish shows in July, at Hampden supporting Calvin Harris and at Doune The Rabbit Hole. Are you all set for them?

Festivals were my upbringing: I know that scene, I know what goes down well. I’ve got experience of playing in Glasgow, and while I haven’t played in Stirling, I grew up there. I learned my skills at festivals. I think I’ve picked up what’s needed at a festival set, and what’s needed for a show like Hampden!

Have you noticed an uptake in friends and family members looking for guest list passes for the Calvin Harris show?

100%. Not my immediate family – they’re lovely – it’s more friends of friends or a random reaching out on Instagram. I was quite explicit; I just want my close family there. It’ll be a real family affair. Also, some of my best pals from back home in Scotland [are coming] and a couple of the girls are coming up from London, so that’ll be nice.

I’ve spoken with Calvin in Ibiza recently – we’ve both been out there. The message to play came from him, and I thought it was an April Fools! It was so casual, in a WhatsApp message, and here’s the biggest gig ever dropping in my lap.

Will you watch Calvin’s set?

Absolutely. I was offered a gig in Edinburgh after but I said no, I want to enjoy it. I will be there to the bitter end and then find a party after, all the way through to being hungover on Sunday morning, looking for a roll and tattie scone and square sausage in Dennistoun.

How did you get into DJing?

I used to be a dancer and I always wanted to be a presenter, but I couldn’t afford to go to uni. I went to college for a dance course, and I won a scholarship for that. After that I was, not falling out of love with dancing, but I had done everything I wanted to. I wanted to give radio presenting a chance.

I’d always idolised Zoe Ball and Sara Cox, but I didn’t have the right qualifications or go down the right route initially, and I couldn’t afford the production courses. I started working at community radio stations, curating shows with Hoxton Radio, Shoreditch Radio, and Ministry of Sound. I was DJing to a degree, but I was only fading in and out and I wanted the proper skills. So, I spoke with Ministry of Sound and said I wanted to DJ, and they helped me, in-house. Ministry of Sound HQ had loads of great DJs who helped me, big time.

You’ve got a residency at Hï Ibiza every week for David Guetta – how’s that going?

Mad. Mad and wild. I felt very tiny in the first week, in this huge club on a huge night. I was nervous – it’s a global audience who don’t necessarily know what is playing in the UK – but after that, I felt more in the swing of things. It’s going alright; it fits so well with my Radio 1 show, so I work there Monday to Thursday, DJ in Ibiza on Friday and head back to the UK for a festival set at the weekend. It’s not a bad life.

I’d love to stay on in Ibiza beyond a Saturday morning, but I love this, and I want to work as hard as I can in case it doesn’t last. I’m loving every second of it.

You released your first single, ‘Soul Full’, earlier this year. Was that a natural progression?

It was something I always wanted to do. I used Ableton but it wasn’t clicking with my brain. Someone suggested Logic, and it made sense. I still have so much I need to learn – I’m not on the level of people [artists] I love, but I’m so happy I’ve made a start.

I mentioned the track in passing to someone at Defected [Records], and they said yeah, let’s do this. It was quick, but there have been a couple of blips recently, with two tracks not getting sample clearance. I can use them in my DJ set as a secret weapon, but I’m happy with how I’m putting things together. I’ve a couple more lined up, including a release on my own label, and a couple of things I can’t mention just yet.

Our more mature readers might remember you from T in the Park TV hosting duties. Was that a good gig?

Oh my God. I love festivals. I was conceived at Glastonbury, it’s in my blood. To be at T in the Park, which was so important to me, meant so much. My best year was 2007. I should have been at my college graduation, but I went to T, and funnily enough, I saw Calvin Harris.

T in the Park was brilliant, it was the thing you always looked forward to, it was magical descending on that site. I loved ending up in the Slam Tent till God knows when.

Yeah [laughs], I’m a huge fan of the show and I wasn’t under contract to Radio 1, so it was a case of being in the right place at the right time. I had been tweeting about the series, so when they researched me before the audition, they knew I was a massive fan. It just goes to show, if you tweet about what you love, who knows what will happen.

Kem [Cetinay, co-host] and I go in and have a laugh. I sometimes think I’ll get over it but every year, including this year, I’m straight back in. I don’t have time to watch any other TV, but we’re in the studio, watching live with the nation, and recording instantly, like a WhatsApp with your friends. It’s an hour’s respite from the madness. I’m a sucker for a romcom!

Do you get to hear any extra gossip?

No, they are so strict, even on press day. It’s a military operation and we’re kept apart from the Islanders.

I was on standby for the show last year, and this year I was asked to be a contestant, but then this chance came up. I like being a presenter and not a contestant, as they have to jump in a ball pool and do challenges. I just get to laugh along with the viewers.

The premise sounds as though it’s about torturing famous people?

Yeah [laughs]. It is so weird trying to explain it. It’s like Celebrity Juice, making celebrities look stupid on camera, with a bit of innuendo. I’m worried about my grandfather seeing it, but I’m not the one getting into bondage or anything lubricated. I get my glam on, and it’s good to have that TV experience again.

Just to round off again with the music: will people have a good time with your sets at Hampden and Doune?

Always. I’m not underground; there’ll be old and new and massive bangers. I think the energy I’ll have at Hampden with Calvin and Doune, don’t worry about that. I’m first on: I won’t need to warm up, I won’t hold back, so get along. 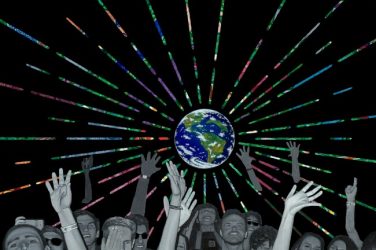 Formed out of the detritus of various internet music forums in 2017, Superorganism’s unique ... 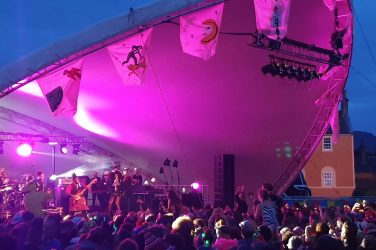