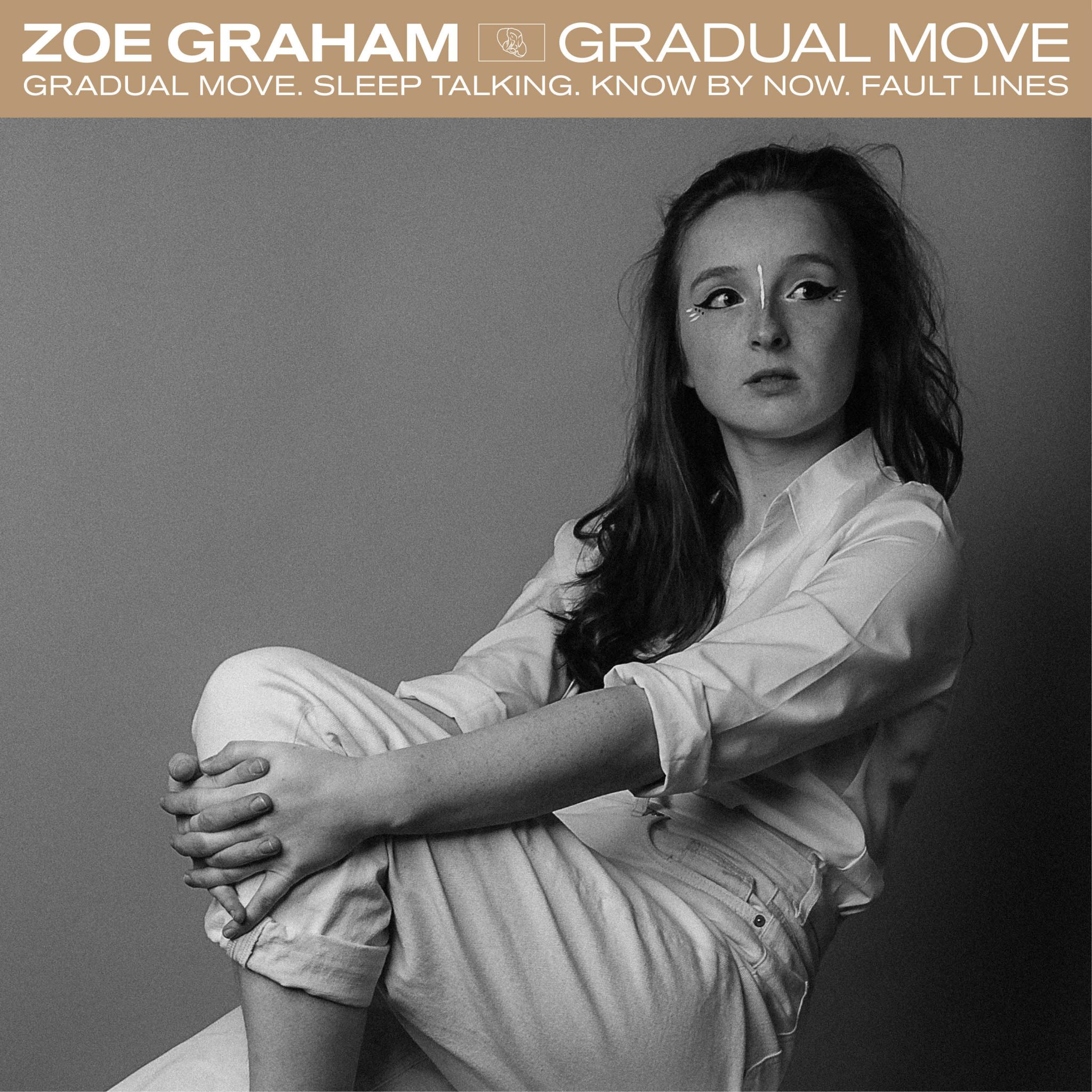 Zoe Graham’s new EP, Gradual Move, sees a seismic change of direction from her previous release Hacket & Knackered. It’s a collection of perfect pop songs, full of nostalgia and self-reflection, pinpointing her at a crossroads personally and creatively. Sonically, it’s pure sunshine. With the light fading on 2020 and the nights fair drawing in, taken in conjunction with your daily Vit D, it could just be the answer to Scotland’s collective seasonal affective disorder.

How have the last few months been for you?

Yeah, it’s been fine. Being in my flat, kicking about is kinda my comfort zone anyway. I’d rather not go out sometimes, so I’ve not totally hated it but, you know, it’s really starting to wear now, to be honest. At the very start there was a novelty about it, and now that there’s the prospect of another six months it’s kinda bad. I’m quite happy just getting on with writing. I’ve managed to get an EP out, which is good.

Has it been a positive experience for you, pulling the EP together over the past few months?

Yeah, it’s been great. Not that I’m not happy with the reception, but I think things would have been a bit better if the world had been normal. I’d have been out gigging and pushing it in that way. What I’ve realised over this time is that doing live shows has actually been quite an integral part of what I do. I suppose it’s something I’ve probably taken for granted, how important it actually is. I pick up a lot of new fans at shows and that’s been, obviously, very difficult at the moment. It’s been fun, I’ve really enjoyed it, it’s been different. It’s made me think about things a bit differently.

The EP itself, now it’s out, and it’s something you can hold in your hand. I guess that must be a bit of a moment for you? It’s your first release on vinyl, right?

On vinyl, yeah. I’ve brought things out on CD before. It’s always exciting but it’s a different kind of energy with vinyl.

It is different. As you know, the first EP was quite acoustic-based and quite folky, in a way, and now this has turned into something else completely. Over the last two years, what I’ve been doing is having a lot of writing sessions with different people, which when I was working on Hacket & Knackered, I wasn’t particularly doing.

So what I’ve learned in these writing sessions is to write a three minute and thirty second song, you know, say as much as you can, get as much as you can in a short amount of time, and write something to a pop structure. I learnt that sport, if you like, of getting something together in a short amount of time and making it all come across well. I think that’s where this EP came from, it was a by-product of that, even though only one of the songs on the EP is actually a co-write.

I’ve been scrutinising what I’ve been writing down a little bit more. The stuff I’ve been writing recently, during lockdown, has kind of worked its way into writing songs for writing a song’s sake – I’ve gone back to writing without necessarily having a structure in mind or a pop song in mind. I think what I’m actually doing now is a healthy middle-ground between Hacket & Knackered and Gradual Move.

But yeah, I think a lot of the new EP has so much to do with working in a pop structure, writing these pop tunes. At that time as well, when working on these songs, I was very into listening to Christine and the Queens, and St. Vincent’s last record as well, a lot of pop-synthy stuff, and that [what I’m listening to] usually ends up being the thing that I’m writing at the time.

You did your remix for Man of Moon recently too.

Yeah, that was fun. I was well up for it, because during lockdown I’d been focusing a lot on my production skills, that’s been my main thing. So to have the opportunity to play about with a track just sounded so much fun.

Although it took me a while to figure out how to approach it, I think, when you listen to the other remixes, you can hear that I’ve come to it from a songwriter’s standpoint. In my head I’ve made a verse, and a chorus, and then a middle eight, while other people have taken it on more of a dance/ house/producer route. I really enjoyed it – it was great fun.

You’ll be looking forward to getting out and playing these new songs to an audience when you can. I’m always thinking about how things are done live.

When I first started working with my manager, Michael [Lambert], when I started really playing live properly, I’d a bad habit where every time I’d write a song, I’d box myself into ‘Oh, I can’t write that cause I wouldn’t be able to play it live’. I was hindering my song-writing. Thankfully now I’ve broken out of that bad habit. I’m definitely still thinking about live stuff, though.

When we first went into lockdown I was nearly finished a live set with my band. Up till this point I’ve been known as somebody who plays by themselves, whereas I do have a band, it’s just been a work in progress for quite a long time. We had nearly finished a full set, we’d gigs planned, we’d a show planned for over in Cologne – which obviously all got cancelled. But at the same point, it’s good to still get to the point of ‘It’s done’. We’re just not doing anything with it yet.

I think there’s a lot I’d change now, from when we were rehearsing. So I’m definitely so buzzing about getting back to it. Though I need to get myself in gear and start practicing, to be honest.

Have you made it back into the rehearsal studio at all yet?

No I can’t, unfortunately I have to shield. I’ve got Crohn’s disease which puts me in a high risk category. I’ve not managed to make it back into the studio, but that’s fine. All in due course, it’ll all come.

The time to reflect has been useful then?

There’s an interesting piece on Vintage Society Music where you list your influences for the EP. That’s well worth checking out. Do you look outside for influences while you’re writing?

Yeah, I think it’s super important. I think what I listen to dictates what I’m writing. Back when I was writing Hacket & Knackered I was listening to a lot of folk music. I was also listening to a lot of C Duncan, although production-wise the sound doesn’t match that record. I feel that the song ‘Hacket & Knackered’ itself was influenced by C Duncan.

Recently, during lockdown, I’ve been listening to the new Declan McKenna and Dan Croll albums and that’s been really influencing my songs.

Can you tell us a bit more about each song on the EP?

This is the opener to the EP. It’s kind of a coming-of-age anthem. At the time I was writing it, I was moving out of my family home, my childhood dog had just died, and a long-term relationship had just broken up. I’d got to the stage where a whole lot had changed and I was coming to terms with the fact that life as I knew it wasn’t necessarily going to be the same again.

Half way through the second verse it says: I’m gone / I live alone / and there’s a dog that’s dying back home I wrote that initially on the piano back at my mum and dad’s place. I just left the song there for a while and didn’t go back to it. Then a couple of months went by; my dog had passed away, and other things had happened. So I went back to the song and wrote the lyric ‘Oh God she’s gone’, which is funny to me in a way, because between those two lines, there’s quite a lot. Although they’re right next to each other in the song, there’s a whole couple of months that happened between those lines that I think made a path for how the rest of the song would turn out. It’s all about changing and things moving on.

‘Sleep Talking’ is about how I wake up in the middle of the night and see things. I get recurring night visions where I wake up and see spiders all around my room. I see a whole bunch of stuff happening that isn’t there. I’ll usually wake my partner up and say ‘Oh, look at these big spiders climbing about the room.’ So that came from that avenue. It kind of relates back to a relationship that kind of felt like it was coming to an end. I’d wake up in the middle of the night in cold sweats, thinking I’d said “I don’t love you anymore”, in my sleep. I’d woken up delirious, I didn’t know if I’d said it, I didn’t know if I hadn’t said it. That was a real weird, stressful time.

‘Know by Now’ is about coming to terms with truths; being honest with myself, which in the past I’ve struggled to do. If there’s something urgent I’ll get it done. But if there’s a problem in terms of friendships or relationships or family things, I’ll bury my head in the sand and not really address it. So that’s what ‘Know by Now’ is about, where [there has been] one too many times of not being honest or times when I’ve ignored the issue, and really ‘I should know by now’ to not ignore it, cause that doesn’t help anybody.

On the back of the EP there’s an emblem of a rock, which is a rock that I have on my mantlepiece in my flat, that kind of sums it all up for me. The ‘Fault Lines’ chorus is a kind of mantra, saying, ‘Didn’t I tell you it’d be alright / Didn’t I tell you it’d be just fine’. All of these worries that I’ve had all this time, the world hasn’t ended, the world is still spinning, it’s all ok. ‘Fault Lines’ is a kind of relief to everything else.

Gradual Move is out now via A Modern Way and is available to stream, as well as to purchase on special gold vinyl, on Zoe Graham’s Bandcamp.