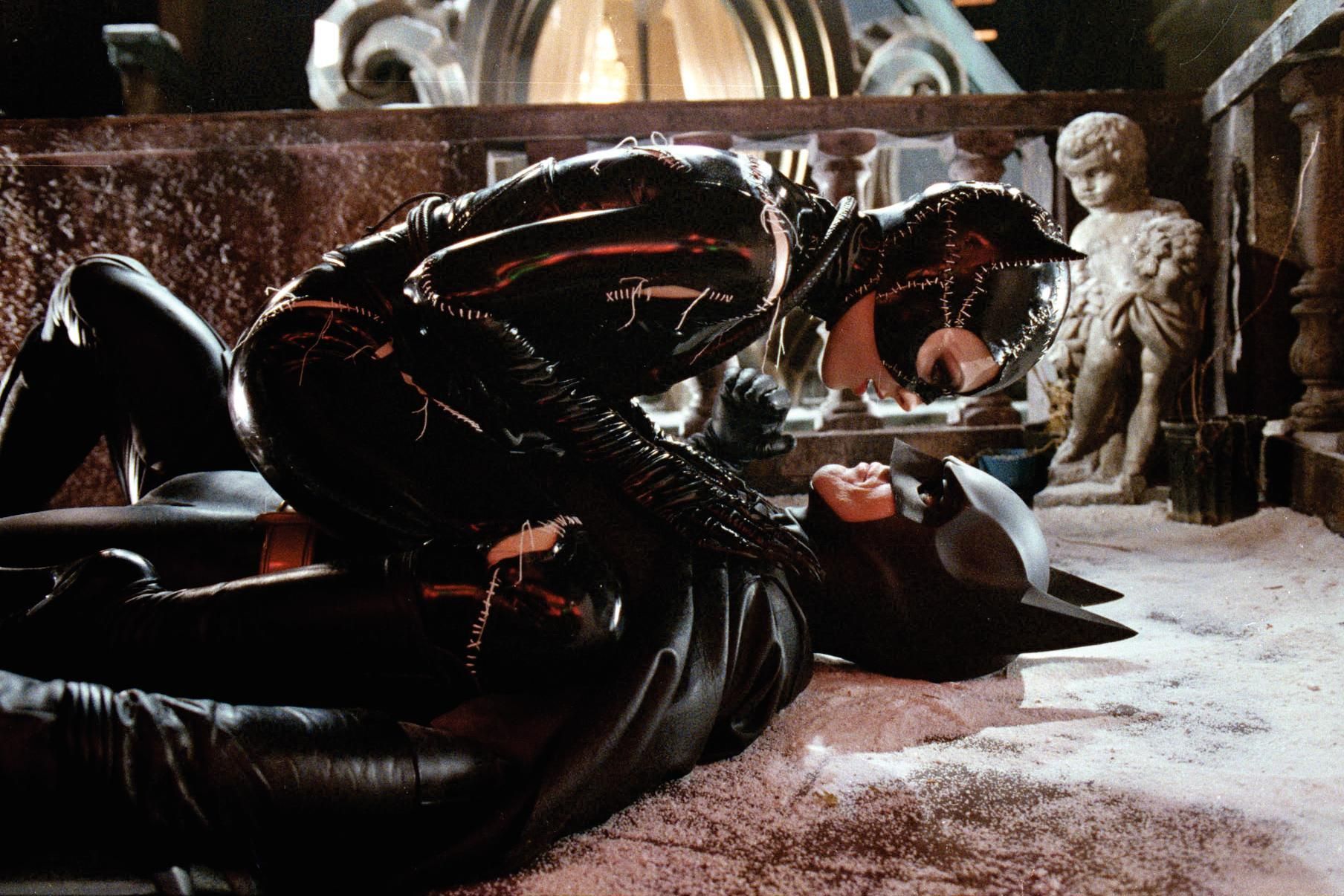 As a dedicated comic book reader, I must admit I’m exhausted. Big screen adaptations seem eternal (pun intended) and, increasingly, woefully mundane; I can count on one hand the titles I feel have veered from the lucrative model with which Marvel and DC churn out each new venture with any sense of style or vision. It pays to return to the late 80s, when Hollywood’s current reigning outsider Tim Burton invented the superhero adaptation as we know it today; or rather, created a blueprint for the scope and innovation future directors could follow. Batman Returns is not the first entry from the Caped Crusader in our humble cavalcade of camp cult classics – our ninth inductee into The (Not) Gay Movie Club was Joel Schumacher’s heinous/glorious Batman and Robin. But Burton’s final venture into the world of Gotham is very much a different beast. For one, there are fewer rubber nipples.

But more significantly, the star of the film is hardly Bruce Wayne himself: yes, this dissection of Tim Burton’s high-camp, sinister cult favourite focuses on Michelle Pfeiffer’s iconic Catwoman performance. She is in the film longer than its eponymous character, and few characters of equal importance have survived such a radical reinterpretation. Batman Returns is somehow celebrating its 30th anniversary, so there is no better time than now to welcome it with open wings to the illustrious (Not) Gay Movie Club.

The list of actresses who were allegedly in the running for the role reads like a brochure for Gay Icons 101: Cher, Annette Bening, Demi Moore, and Madonna were allegedly in talks to play Selina Kyle. But Pfeiffer’s casting is perfect: she relishes every nuance of her dialogue and strikes such a perfect balance between making Catwoman cheesy and indulgently camp. And one must respect her commitment to the role itself – the catsuit was an arduous ordeal. Pfeiffer would be covered in talcum powder to squeeze into one of her 60 latex suits, then confined to the costume – with corset and full head mask – for 12 hours, only removing it for one toilet break. And Pfeiffer looks like sheer perfection: no anti-hero has ever looked as provocative, sinister, and powerful as Pfeiffer’s visionary Catwoman. She epitomises every gay, nerdy kid’s muse. Oh, and she puts a live bird in her mouth.

One interesting element in Batman Returns, and indeed the entire franchise, is the notion of duality; how characters explore their authentic self through the guise of another. The adopted personas assumed  by  Batman,  Catwoman,  and  Penguin facilitate unconventional, dangerous, but powerful behaviour. There is something inherently queer about the way in which they find dominance and authenticity in their chosen identities, especially regarding Catwoman. Wayne is still pretty vanilla when he’s Batman, but Kyle evokes the assertion and sensuality previously lacking when she dons the catsuit. In this iteration of the character, Selina Kyle is not explicitly queer (in the 2015 comics, Genevieve Valentine’s Catwoman was bisexual during her series run), but there is no denying that Burton’s vision for her certainly reads as such.

There is little ‘sub’ in the film’s queer subtext. Take Penguin’s perpetual longing for acceptance and approval – sure, he is theoretically hetero, but family rejection is often part and parcel of the queer existence. And his destructive, egomaniacal behaviour is the product of that abandonment. More interestingly, however, is how Catwoman’s role in the film consists of rejecting and subverting the gender stereotypes under which she once suffered: Selena Kyle – the meek, underappreciated secretary who has suffered at the hand of traditional, constricting gender ideals

– embraces her sexual expression (in bondage attire, no less), vows to dismantle the capitalist cruelty of her boss and his organisation, and showcases a vague ambivalence to Bruce Wayne romantically. Sure, they get along well enough, but Kyle is galvanised more by vigilante justice and destroying the patriarchy of Gotham. We love to see it. She rejects domesticity: look at the way she smashes her doll house, shreds her teddy bears (an act I found very disturbing growing up) and spray-paints her pastel pink apartment black after supernaturally surviving her attempted murder. She literally destroys a closet, people! Doesn’t seem very subtextual to me.

And this is arguably one of the campest outings for a superhero adaptation, to some extent even rivalling Batman and Robin. Burton’s art direction is stunning and outrageously exaggerated. The set pieces, costumes, and minor characters are cartoonish, but with a sinister, German expressionist-twist. Brief shout out to the glamorous but ill-fated Ice Princess, who I was obsessed with as a child. The performances, especially those of Danny de Vito and Christopher Walken, are so perfectly over the top. And the screenplay! This film is hilarious, and surprisingly subversive. Gay trivia alert: the screenwriter Daniel Waters also wrote the perennial gay classic Heathers, and his brother Mark directed Freaky Friday and Mean Girls – the most important films of the 21st century. Penguin (while being bombarded by food, ‘Why is there always someone who brings eggs and tomatoes to a speech?’) and Catwoman (‘The thought of busting Batman makes me feel all… dirty. Maybe I’ll just give myself a bath right here.’) are treated to the best dialogue in the film and deliver each line with aplomb.

Batman Returns truly holds a prominent place in my heart, and I imagine queer audiences from all walks of life will agree that this outing from the Caped Crusader is the most sinister, indulgent, and fascinating. Sure, it’s big Bruce’s name above the door, but there is no denial that this is Catwoman’s show. It is hard to pinpoint exactly why Catwoman appeals to queer viewers the way she does: perhaps we appreciate her status as a subversive, dominant force who revels in chaos and dismantling the patriarchy on her terms; perhaps it’s in her transformation, mirroring the journey many of us have made in becoming the best versions of ourselves; perhaps it’s because she is sexy, cool, and smart and does tricks with her whip.

Regardless, Batman Returns is a beautiful, weird, and endlessly enjoyable film that indulges its viewer in Burton’s high camp, twisted fantasy.

Book Review: The Sound of Being Human – Jude Rogers