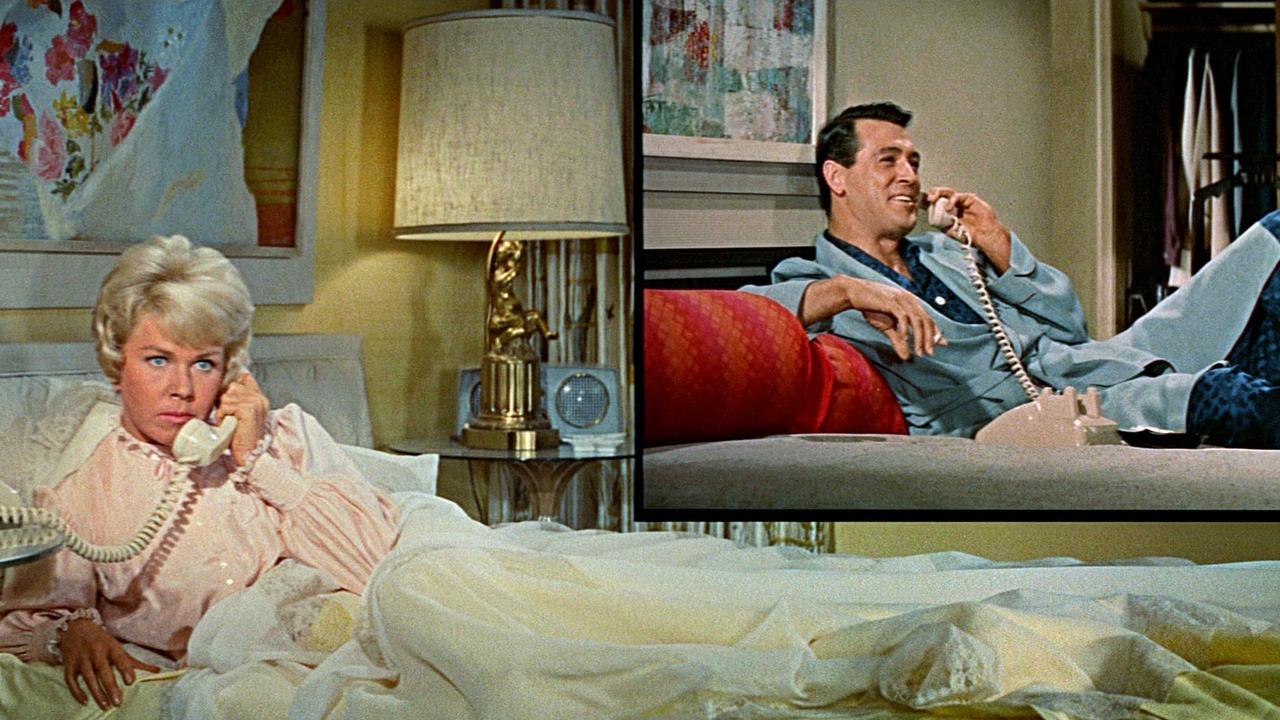 I’m sorry to confirm that Valentine’s Day is still happening this year. It seems our least favourite, saccharine ‘holiday’ is resistant even to a global pandemic, if shops, streaming services and social media are anything to go by.

But perhaps we shouldn’t be so curmudgeonly: maybe indulging in the romantic, basking in the glory of St. Valentine himself, may be just the thing we need. In which case, we have a treat for you and your beloved: a new addition to our illustrious (Not) Gay Movie Club, 1959’s romantic comedy Pillow Talk, the antidote to any feelings of romantic reluctance.

Pillow Talk happens to star two serious Hollywood juggernauts – Rock Hudson, one of the silver screen’s most handsome and charismatic leading men, and Doris Day, a woman who epitomised the girl-next-door archetype for her entire career. The film follows interior designer Jan Morrow and unbearably handsome composer Brad Allen, two sparring neighbours who share a telephone line (I can’t believe this was ever a thing that people had to deal with).

You see, Brad spends a disproportionate amount of time clogging the line serenading an endless list of women, much to the chagrin of Jan, who ultimately files a complaint against him. Ever the cad, Brad decides to masquerade as a Texan rancher, Rex Stetson, and the pair naturally fall in love. But this ruse is short-lived, as Jan’s unrequited suitor and Brad’s best friend Jonathan gets savvy to the situation and finds himself in the middle of a love triangle.

Unbelievably stupid? Yes. Wildly entertaining? Absolutely. And we would be remiss not to mention the status our leading actors enjoy as two of Hollywood’s premiere gay icons. Doris Day had cemented herself as America’s sweetheart by this time, and she is effortlessly camp. Her eponymous role in Calamity Jane has historically been celebrated for its alleged lesbian subtext, while I have always contended that she is the beard any gay man in the right mind would kill for. Mums would love her. Then there’s Mr Hudson… I think he deserves his own paragraph.

Rock Hudson is arguably one the most high-profile gay actors in the history of Hollywood. His sexuality was always the subject of rumours, with several co-stars, including Day, claiming to have known about his off-screen sexuality. It was a different era, one in which leading men simply were not anything other than virile, heterosexual heartthrobs (has much really changed…?).

He was, tragically, the first major Hollywood actor to succumb to AIDS, in 1985. His death, for many, signalled the severe reality of the crisis: if this handsome leading man can get it, surely anyone can? His death gave AIDS a face, a notable figure adored by millions subjected to this frightening mysterious gay illness.

It’s impossible to watch Pillow Talk without the bittersweet fantasy of imagining what Hudson could have achieved had he lived longer – you know Ryan Murphy would have lured him into one of his projects. But as heart-breaking Hudson’s story is, audiences can savour his magnetism and talent forever, frozen in time, and Pillow Talk is as good a souvenir as anything.

Pillow Talk holds the standard all romcoms should aim for, not least because it is simply so funny. The dialogue is sharp, and our lead actors execute every line with impeccable comic timing. And as Brad/Rex’s deception begins to unravel, the farce allows Day and Hudson to really let loose and revel in the lunacy of the situation.

But no induction into our distinguished movie club would be complete without a deep dive into the film in question’s costuming, and Pillow Talk deserves serious exploration. I wish I could dedicate my word count – no, the entire February issue – to discussing Doris Day’s wardrobe, but I feel my editor wouldn’t look kindly on this.

In a gross miscarriage of justice, the film’s costume designer Bill Thomas, uncredited for his work in the film, did not receive an Academy Award nomination. Jan’s work wear is divine – the cream dress with red box hat and matching, red-lined coat springs to mind – and her at-home attire captures the cusp of late fifties fashion beautifully.

I wish I could dedicate my word count – no, the entire February issue – to discussing Doris Day’s wardrobe

Pillow Talk was apparently Day’s attempt to break free from her girl-next-door associations and become ‘sexy’ and cosmopolitan, and this is reflected in how Jan is dressed. Of course, Hudson looks flawless, but Day’s style breathes life into the film. Thank you for coming to my TED Talk. Leave feedback on your way out.

What really makes Pillow Talk, however, is the indisputable chemistry between Day and Hudson. Their sparring and sincere affection for one another offer this light romcom some real heart. We know, in hindsight, that the two were firm friends in real life: if you fancy a cry, watch his appearance on her 1985 show Doris Day’s Best Friends. The two catch up and reminisce on their life together, but what is most painfully apparent is how AIDS is ravaging Hudson. He is so far removed from the Adonis we see in Pillow Talk.

His speech is bizarre and incoherent. Day did not know he was dying and was shocked by his appearance, but treats him as compassionately as one would expect. She later revealed she was aware of his condition: ‘He was very sick. But I just brushed that off and I came out and put my arms around him and said, ‘Am I glad to see you.’

Pillow Talk on paper is the perfect Valentine’s Day film – it’s funny and romantic, the leads are endlessly charismatic, and the costumes are heavenly – but, considering the off-screen rapport between Doris Day and Rock Hudson, the film feels more like a celebration of platonic love. To me, the duo captures the mystifying, wholesome, and mutually essential dynamic between gay men and their female friends so perfectly, even if the characters are actually attracted to one another.

Send it to your best Judy; watch it separately and have a Zoom call to celebrate how good it was, how insane Doris Day’s costumes are and unpack the feelings Rock Hudson has understandably stirred within you.

Pillow Talk may be our most charming, romantic addition to The (Not) Gay Movie Club. It’s a blissful escape to a reality in which Rock Hudson is more magnetic than ever, Doris Day is an angel in a box hat and people share telephone lines.