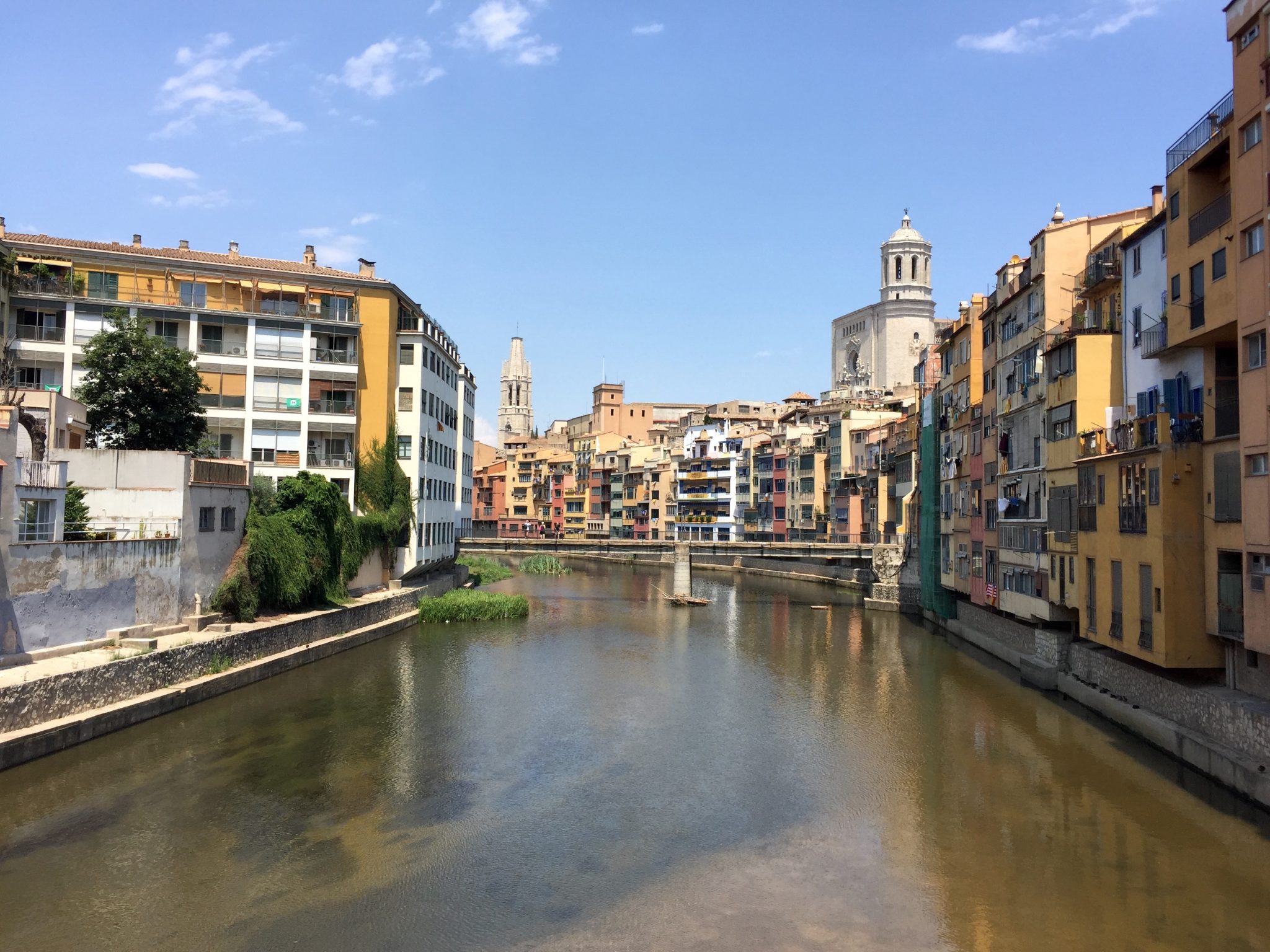 Get away from the crowded beaches and general bustle of more popular Spanish cities with a visit to historic Girona and Vic. With its compact airport and direct flights from Scotland, Girona is an excellent base for a holiday and it shouldn’t be dismissed as just a cheap route into Barcelona.

Girona is a walkable, historic city with markets, museums and more, as is the lesser-known city of Vic in nearby Osona county. Foodie Explorers journeyed to Catalonia to find out more.

Girona is a city in Spain’s Catalonia region (‘Girona’ is Catalan while the Spanish call it ‘Gerona’). Located between the Rivers Ter and Onyar, Girona has superb medieval architecture; search out the Game of Thrones sites, as well as its walled Old Quarter (Barri Vell) and the Roman remains of the Força Vella fortress. Wander along the Passeig Arqueològic, which is a walkway following the city walls, for stunning views.

With its rabbit warren of an old town, boutique shops hold firm here. Delicada Greta (Carrer de la Cort Reial) is a ladies’ boutique filled with bright and stylish offerings. Plastic Store (Plaça del Vi) sells a mixture of fashion, gifts and all things vintage, including original 60s items. Need to find some unusual jazz or update your manga collection? Then Moby
Disk Records (Rambla de la Llibertat) is the place you need. Here you’ll not only find vinyl, but DVDs, posters, board games… everything for your inner geek muso needs. If bartering is your thing, then the twice-weekly market within Devesa Park is for you. There are over 200 stalls, with everything from local food to clothes.

One thing we grew fond of in the course of our Catalonia stay is vermouth, or ‘vermut’ as it’s called there. Typically of the bittersweet and red variety, it goes down well with the evening sun, so head to El Vermutet de Can Gombau (Carrer Bonaventura Carreras) to sample some. If beer is more your tipple, try Dolce Salato (Rambla de la Llibertat) for a Whym; it’s a local brand. The area around the colonnaded Plaça de la Independència is also lined with bars and restaurants; good to start the evening off, or for a quick nightcap.

Holding three Michelin Stars and twice voted the best restaurant in the world, El Celler de Can Roca (Calle Can Sunyer) is owned by Roca brothers Joan, Josep and Jordi. There’s a 12-month waiting list to get a table, but if you really want to go, ask to be added to the list in case of cancellations. Like us, you might be lucky enough to secure a last-minute table. It definitely isn’t a cheap option, but it’s a once-in-a-lifetime thing. Divinum (Carrer Albereda) is a more budget-friendly venue for a splash-out meal.

The directors here studied under Joan Roca, so the standard of cooking is high. Girona isn’t just about fine dining, though; some of the best Pintxos (the Basque take on tapas) bars anywhere can be found throughout the city.

Our favourite was Txalaka (Carrer Bonastruc de Porta), not the most traditional-looking establishment, but filled with goodies. Fill up on everything from Manchego cheese to croquettes, cured ham, and anchovies, washed down with a glass of sparkling wine. End your evening with ice cream from Rocambolesc (Carrer de Santa Clara), also owned by Jordi Roca.

From 4-star hotels to hostels, there is something for every budget. Hotel Gran Ultonia (Gran via Jaume) was where we rested our heads. Just outside the old town but near enough to the action, it has everything you need in a hotel. They also have an excellent rooftop bar. For something lighter on the wallet, Can Cocollona (Carrer Mare de Déu del Remei) is a hostel located near to Girona Railway & Bus Station. Note, though, that the hostel features dorms only, with no private rooms.

There is so much to see in Girona, and it’s all within walking distance. Or take the dinky tourist train if you want to rest your feet. The first stop has to be the Eiffel Bridge, designed by yes, that same Gustave Eiffel. Here he showcases his ironwork skills with this striking red bridge. Stop here to take in the famous view of the colourful houses perched above the River Onyar. From here the medieval quarter (Barri Vell) is on the Eastern side, and the 18th Century buildings are on the Western side. Girona Cathedral has 91 steps to conquer, but conquer it you should. Inside, the cathedral features the widest Gothic nave in the world. If you don’t want to spend the 7 euros to get in, at least stand and imagine yourself at the steps of the Great Sept of Baelor. In case the weather isn’t so good, there is also an Art Museum at the rear of the cathedral.

The Museum of Jewish History (Carrer de la Forca) tells the story of the Jewish community who lived in the area until they were expelled in 1492.

After this, get some fresh air with a walk around the city walls. Head down the path towards the Arab Baths for some respite from the sun. Originally built in 1149, the baths eventually became part of a convent. Lucky nuns! From here, you can walk down towards the river and pay a visit to La Lleona, a stone carving of a lioness climbing a pillar. Superstition dictates that you’ll return to the city if you climb the metal steps and plant a kiss on the lioness’s stone bum!

Vic (pronounced like ‘beak’) is the capital of Osona county, and it’s 37 miles / 1 hour inland from Girona by road. The L28 bus runs from Girona and selected buses make stops at Girona airport.

Like Girona, Vic is an ancient city which has been populated since Roman times. It still retains its medieval heart, and being smaller and less hilly than Girona it can be easily walked. The cathedral is the main point of interest, as you can climb the bell tower for views over the town and surrounding countryside. There’s also a Roman temple and history museum in the old town.

Vic’s market takes place on the main square, Plaça Major, and is a must-visit if you are in town on Tuesday or Saturday. There’s been a market here since the 9th century, and it has to be one of the most colourful we’ve ever seen. If you love mushrooms, you’ll be in a strange sort of heaven with all the varieties for sale here – most of them huge. Regular veg such as tomatoes and peppers are also super-sized. Another quirky feature of the market is that you can practice milking a cow!

La Bauxa Productes del Montseny (Carrer Rocada) in nearby Seva sells a great selection of beer, wine and other specialities from the Montseny region, which is just south-east of Vic.

Look out for L’Snack on Plaça Major; it’s the best place for people watching. Especially with a gin and tonic.

Vic is famous for fuet, a type of long, thin cured sausage; the name actually means ‘whip’ in Catalan. Darker in colour than the more wellknown chorizo, its spiciness comes from black pepper instead of paprika. The best place to try it is at Ca La Teresona (Carrer dels Argenters), a family-owned restaurant where six generations have held the reins since 1837. You can even have a go at making your own sausage in the workshop upstairs. If that all sounds like too much effort, their Teresona XXI restaurant serves up lots of local specialities and wines.

We stayed at Up Rooms Vic (Passatge de Can Mastrot), a funky, modern 4-star hotel on the edge of the old town. We ate at the restaurant here one evening, and the food turned out to be of an excellent standard.

Vic is famous for fog and mist all year round, and what better way to see the mist rolling in from the Pyrenees than by hot air balloon? There are a number of companies who operate in town, and so we took to the skies on our first ever hot air excursion. We won’t lie, it was slightly terrifying, but the views and photos were worth it.

Guided tours of the historic centre take place every Saturday. Lasting 90 minutes, these cost €5 from the tourist info office.

We mentioned mushrooms earlier – well, the town of Seva holds an annual mushroom festival! Taste, buy, and learn how to pick mushrooms safely. The festival takes place in October.