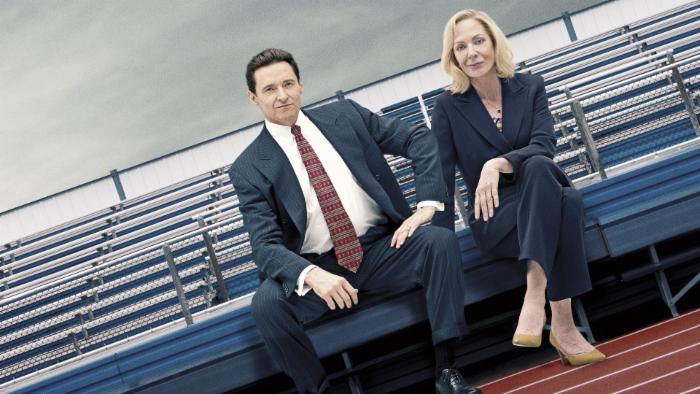 This astute and morally complex true-life drama takes a satirical look at the insidiousness of the financial corruption which continues to seep into every aspect of modern society.

Based on the shocking real-life embezzlement scandal of the early 2000s, Bad Education stars Hugh Jackman as Frank Tassone, beloved superintendent of Roslyn School District in Long Island, New York. He and his staff are proud that their district is considered one of the best in the country, and they’re well on their way to becoming number one. When Frank’s long-time friend and colleague Pam (Allison Janney) is implicated in the embezzlement of funds from the school system, following an investigation by student reporter Rachel (Geraldine Viswanathan), he goes into panic mode. Any drop in the school’s standing would mean local property values would plummet. But, as the spotlight is shone brighter upon the educational kingdom reigned over by Frank, his carefully crafted veneer of upstanding authority begins to peel away.

In a career-topping performance, Jackman completely embodies the flawed and fascinating central figure. There are lovely, inspired little details in the way he carries and presents himself to the outside world, and how he preens in the mirror to make sure his appearance is as immaculate as his public persona. His performance is one of lived-in nuance, transcending what could easily have veered into caricature.

Director Cory Finley has followed up his disquieting debut Thoroughbreds with a mature, multi-layered drama which, much like the man it examines, is beautifully constructed. The delicate ebb and flow of the action works skilfully to blur the lines of truth, and unveils information which makes us reflect differently on what we’ve just seen.

Working with a sharp script by Mike Makowsky, Finley manages to conjure a near-perfect tone which captures the absurd anxiety boiling and building under the story. He plays up the more jaw-dropping moments of this sometimes unbelievable true story, to the point where it has shades of a horror film. But at the same time it’s never allowed to slip over into any sort of glib parody, marrying righteous suspicion about the characters’ actions with empathy towards them as people.

However, the real key to why Bad Education works so well is that it never portrays Frank as a one-dimensional villain – he clearly cares about his students, and about making his district the best that it can be. Watching those values becoming twisted by insidious self-interest and blindness to wrongdoing is absolutely fascinating. The compelling drama here lives in those morally ambiguous shades of grey.

Elusive singer Glüme describes herself as ‘a Walmart Marilyn Monroe’, which seems apposite. After ...