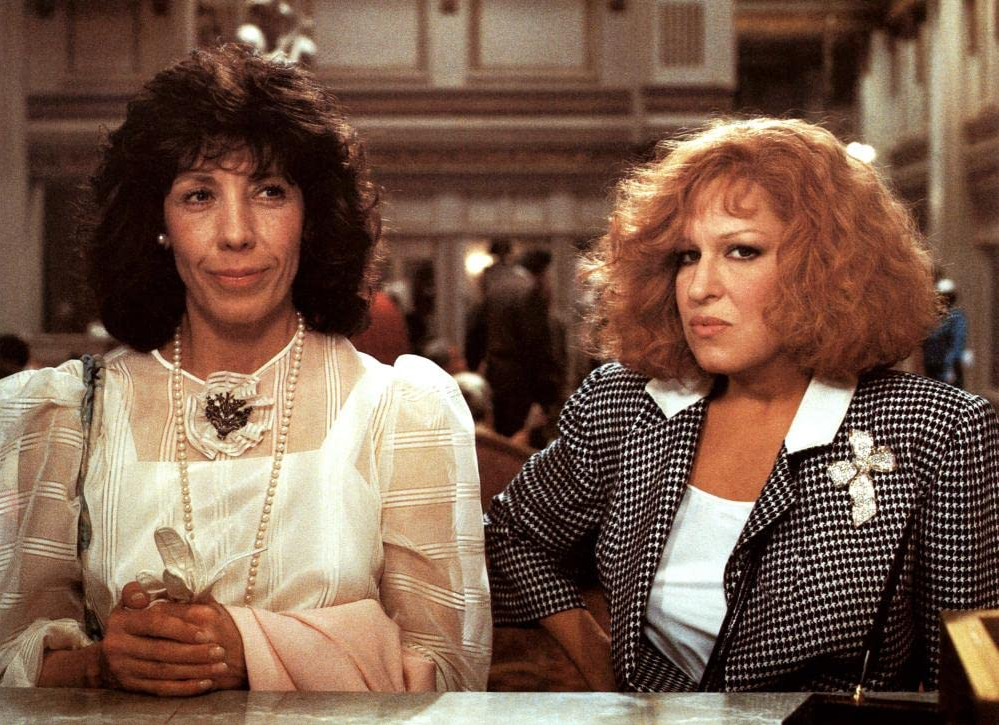 From Twins to the various incarnations of The Parent Trap, twins and their hilarious escapades have never failed to inspire Hollywood filmmakers. Just look at The Shining. And there are few examples as convoluted, camp and kitsch as Big Business.

My appreciation of this 1988 farce is relatively new, but its stars are quintessential Hollywood juggernauts, with whom I am very familiar. Bette Midler, the Divine Miss M, is one of pop culture’s most enduring gay icons. She is bawdy, her talent is immense, and every role she plays – even her offscreen persona – exudes unflappable confidence and joy. Lily Tomlin, meanwhile, has enjoyed a great resurgence because of Grace and Frankie, but has been a trailblazing comic actor and activist for nearly 60 years.

Big Business currently enjoys three stars on iMDB, which is frankly quite surprising – we expected it to be lower. Just when we were worried our discerning collection of movies was becoming too highbrow and, as one of our particular characters would say, highfalutin, it felt right to welcome Big Business into The (not) Gay Movie Club.

Can you believe that two sets of identical twins could have the misfortune of being born and mixed up by the same inebriated nurse in the same hospital? Some people have no luck. This terrible confusion occurs in a backwoods town called Jupiter Hollow, and thus we are presented with Midler and Tomlin as two pairs of twins, Sadie and Rose, who each grow up with the wrong sister.

The ‘business’ portion of the film, and indeed the closest thing we have to a plot other than the twin switch, is that the Shelton sisters (the city slickers) are co-chairwomen of a huge conglomerate in New York City. When the treacherous Sadie decides to liquidate her company’s furniture factory in Jupiter Hollow, Sadie and Rose Ratliff – the hicks – come to New York to confront her at the stockholders’ meeting, unaware they are meeting their identical twins. Confused? Just roll with it and bask in the glory of Midler and Tomlin delivering excellently stupid performances in what is an ultimately stupid film.

The script is…serviceable. As cheesy 80s comedies go, it delivers laughs, but I wonder if this is thanks to the succinct comic timing of the film’s leads and their ability to elevate a so-so script. But there are moments of glory throughout, when the labyrinthine plot unravels and chaos ensues. The most iconic moment, of course, is the reveal, when each set of twins discovers the other in the ladies’ room. What emerges is nothing short of performance art: Bette Midler, in a white polka dot power suit, is confronted with her twin but assumes she is looking at her reflection, and shimmies to check what she is seeing. One watch and you will never pass the bathroom mirror the same again.

The costumes are stupendous, capturing the essence of brash, audacious 80s power-dressing – gargantuan shoulders, asymmetric hair – with outfits usually reserved for a Drag Race hillbilly acting challenge. Midler, naturally, is afforded the lion’s share of the best outfits, especially the scene in which creepy businessman Fabio takes her out and she wears a marvellous gown, incidentally foreshadowing her stint in Hello Dolly decades later. But Big Business feels like a time capsule (those looking for an elegant film of restraint and taste should perhaps look elsewhere) and this is felt most prominently in the hair and costuming.

The duo have good chemistry, but Midler and Tomlin shine individually. The audience is treated to two stellar comedic talents who are clearly in their element; there are plentiful secondary characters, but justifiably they pale in comparison to our leading ladies. Playing both sides of the same coin allows each actor to portray their most vulnerable and most brash dynamics in equal measure.

At times it feels like you just want each to play their bolshy counterpart for the whole film, as it is simply so joyous to witness, but Midler and Tomlin allow the softer characters to shine in more subtle ways. In particular, Lily as Sadie Ratliff is an inspiring tour de force – a community activist, unafraid to take on a challenge many consider to be above her station, and ultimately a social justice champion. If ever there was a spin off, I know who I’d want to see more of.

So, what qualifies Big Business to join the illustrious ranks of our glorious, pseudo-gay gems? The plot is, of course, ridiculously camp, and our leading ladies deliver their performances with full ham. Midler and Tomlin are gay icons extraordinaire, so their very inclusion in the film merits Big Business’ place on our list.

But there are gay characters in the film, which is a surprising oddity in our choices so far. However, they are handled with remarkable taste and care for 1988. We have two charming gay men, Chuck and Graham, who are seen sharing a bedroom and aren’t crude caricatures. A character asks if the kimono Chuck is wearing was bought in ‘[Viet]Nam,’ to which he responds, ‘No. Fire Island.’ Yes, our bar for meaningful representation is (justifiably) low, but in a film like Big Business it comes as a welcome surprise to see restraint where it is deserved.

Is there a message to Big Business, other than ensuring your midwife isn’t drunk enough to confuse your child with someone else’s? I don’t believe so, nor should there be. We are treated to two of comedy’s finest performers delivering low-stakes, high-camp shenanigans, and that should be enough for us. In a pinch, one could argue that each sister, in their own way, is desperate to belong, a feeling LGBTQ+ audiences can always relate to, and their journeys to achieve self-acceptance are inexplicably complex.

We’ve arguably all felt like Tomlin’s country persona, desperate for bigger and better things, to be seen, to excel. And it’s also easy to identify with Bette’s portrayal of the down-home, country bumpkin twin, vulnerable and sensitive to the fast-paced world around her. But we welcome Big Business into The (not) Gay Movie Club and urge you to enjoy the film for what it is – a high camp comedy of errors, with two iconic performers delivering what they do best.

Oh, and the shoulder pads. You couldn’t overlook them, even if you tried.