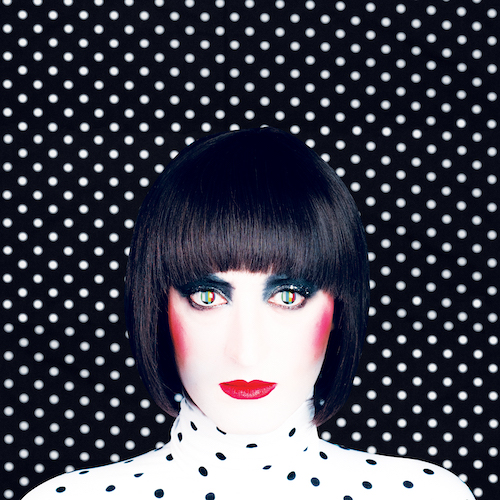 Enigmatic Canadian art pop singer Art d’Ecco wears his bellbottoms as unashamedly as Jon Spencer, but approaches things from another angle. Where Spencer kicks it in black, d’Ecco is a satin-clad androgynous diva.

This is his concept album, celebrating celebrity culture in lieu of something real. We’re talking 70s and 80s retro here – it comes on like a Spider from Mars, but lands somewhere around a ZX Spectrum. The Blitz Kids are as much the aesthetic as the glam fixation. The album was even recorded on a fifty-year-old console, and the production from Colin Stewart is as slick and shiny as back issues of style magazines like The Face.

It creates a strange effect within the listener, a kind of disconnect – when one decade seems to be homaged and settles in, then another is brought in – this is especially true of ‘Bird Of Prey’, with its early 70s Bowie acoustic strum and early 80s Gary Numan synth. The anthemic ‘TV God’ has the audacity to merge an ABBA-style piano line with the euphoria of T Rex. This is bizarre at first, but then it all starts to make sense. If nostalgia is a way of engaging with the wider world in times of intense upheaval, why not mash it all together in a pop cocktail?

The best moments are the most assured. ‘The Message’ has a little malice to it, a glower amid the lasers. ‘Head Rush’, with its fat, heady bursts of saxophone, stompy drums, and layered ‘woah oh oh’ vocals, could almost be in danger of toppling off its platform heels into parody, were it not so lovingly performed: a mere strut from Slade and Bolan, but with a pinch of modern detachment. The instrumentals –’Channel 7 (Pilot Season)’ and ‘Channel 11 (Reruns)’ – are beautiful, evoking the cinematic synth shimmer of Giorgio Moroder at his most febrile, or Kraftwerk circa The Man Machine.

Escapism is the main thrust of the album, a longing for days which never really existed, an airbrushing of history. It’s eccentric as hell, a stadium-sized embrace of pop’s past. Enormous fun, if you surrender to it.

In Standard Definition is out 23rd April, via Paper Bag Records