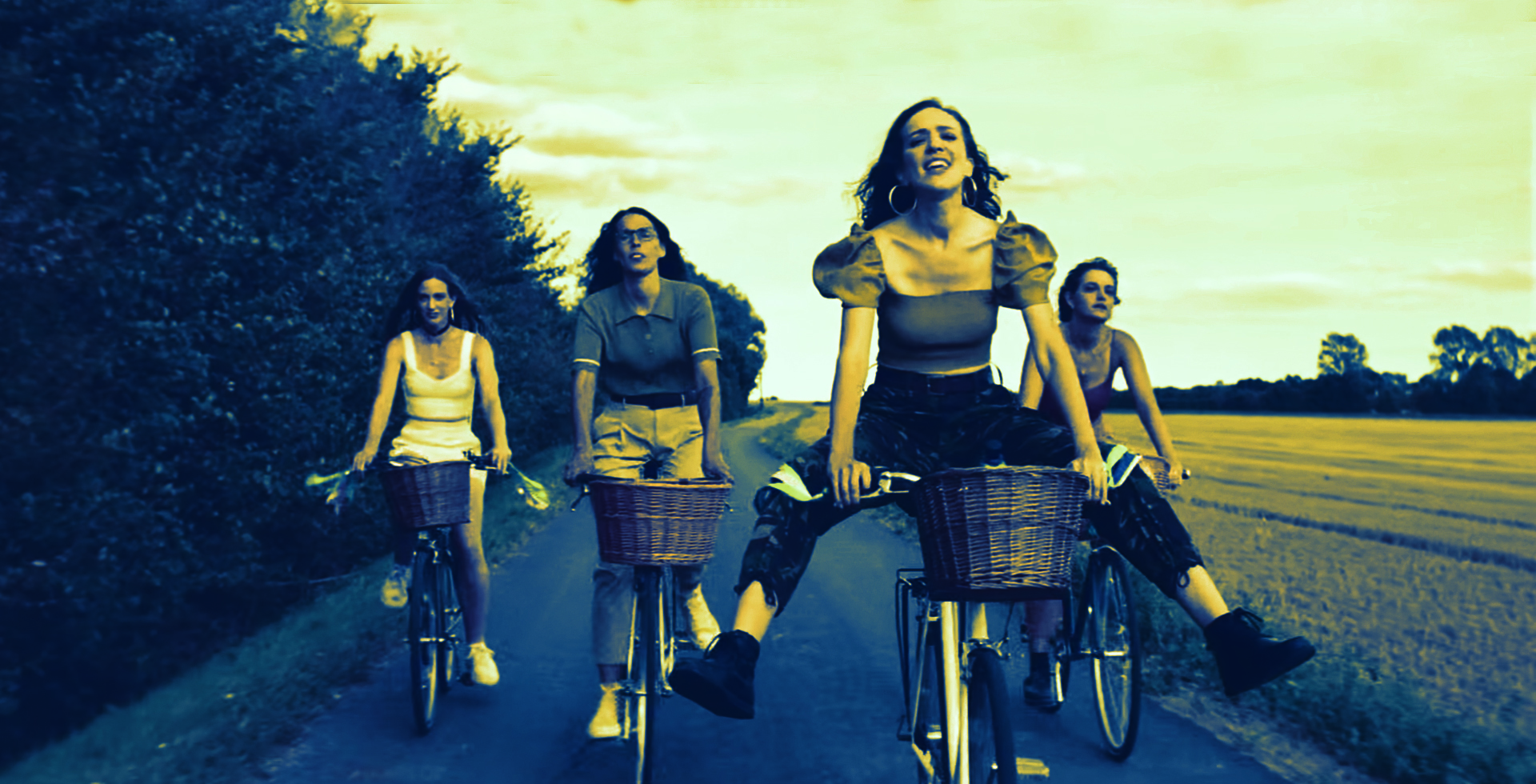 The Big Moon, live or on record, exude a collective chemistry that seems too natural to be real. Despite apparently not being friends since nursery, the four of them give off an intrinsically united vibe with seemingly very little effort. Their first album, Love in the 4th Dimension, was more than anything, slightly ramshackle harmonious fun.

Walking Like We Do is an altogether different beast that straddles the conventional ‘difficult second album’ trope with something a bit more ambitious. The singles on this album will definitely get more radio play. The band have appeared on Sunday morning TV, and the album cover sees them bedecked in airy white clothing, which is reminiscent of either a boy band from 1992 or a knowing pastiche of said boy bands. I’m saying 70/30 on the earnest/ironic slider, but it reinforces the camaraderie between Juliette Jackson, Soph Nathann, Celia Archer, and arch-cool drummer with alliterative superhero name, Fern Ford.

Is this album a move towards a more mainstream audience, or a reflection of a more mature approach to songwriting? I’m going with the latter. ‘It’s Easy Then’ is a signal of intent, with Jackson’s ghostly timbre breathing over a fantasy-like piano intro. Multiple harmonies couch the track in floaty wonder, while the spiralling synth sitting underneath the vocals relays the slightly unsettling vibe of a haunted big top circus.

‘Your Light’ is one of several singles on this album that you’re likely to hear during a highlight compilation on Match of the Day. It’s more than just a flashy patchwork of sound textures, though; it’s a bit of a masterful take on pop composition. An atmospheric intro soon unravels into what could be described as two pre-choruses after every verse, including one with a pleasing time change before the chorus soars over the listener with a sort of pleasant regret.

Throughout, Jackson’s turn of phrase is easy to love. Sometimes, everyday phrases are turned expertly through repetition into something more thoughtful, and all of it’s shot through with a knowing conveyance of the modern observer. ‘Your Light’ has a middle eight that includes the line, ‘And I wonder since when, was my voice a foreign object in my mouth?’

‘Dog Eat Dog’ contains some resonant couplets complimented by ghostly, operatic backing vocals. This track, like half the songs on this album, is a grower. Many melodies at first seem simple and become more emotive after repeated listens.

Among a plethora of single-friendly tracks, ‘Why’ still manages to stick out, thanks to its meandering progression and a chorus surrounded by staccato synth strings, chiming with plinky toy piano sounds.
‘Don’t Think’ would be the lead single on any other album released this year. The shift of the bass to the front of the mix, with the attack dialled down during ‘Don’t Think’, bursts into a glorious piece of angst-disco that’s about as satisfying as the first G&T after an extended stay in Barlinnie. An unexpected guitar solo sneaks in, which is noticeable, but it doesn’t feel like the band have intentionally tucked the guitars away. It’s reflective of where the observational, heartfelt song writing has taken them, rather than a stylistic decision.

‘Waves’ is the sixth out of six tracks to have a piano or keyboard intro. It will have you mouthing along with its ‘you had me going for a minute, there’ refrain before the first listen is over. The old measure of a popular hit was if a binman could enthusiastically whistle it. If you replace the binman with me, and the whistling with slurring the words in attempted affection towards my cat, then The Big Moon have smashed another pop benchmark.

‘Holy Roller’ starts Side B, and the cocktail lounge mix of instrumentation makes the distorted guitars all the more exhilarating when they accentuate the off-beat fills. Jackson’s fanciful musings are gilded by the track’s borderline James Bond vibe.

‘Take A Piece’ is the one you’ve already heard, with the shamisen-sounding riff and irresistible looping chorus. ‘Barcelona’ is the one you’re certainly going to hear over the next few weeks, full of cascading vocal harmonies and snare-skipping shuffles.

By the time you get to ‘A Hundred Ways To Land’, the various instruments have been blended so subtly that you hardly even notice that part of the percussion sounds like a dimed reverb pedal being turned on and off.

Closing track ‘ADHD’ resounds with lyrical reflection dressed up in the band’s idiosyncratic vocal harmonies, although low brassy sounds fill out the album’s close with more optimism than self-pity. It’s a perfect, emotional note on which to finish an album that has left me fascinated to see what The Big Moon do next. Walking Like We Do shows they’ve already produced a pile of crafted, mature songs. The sky, big or otherwise, is the limit.