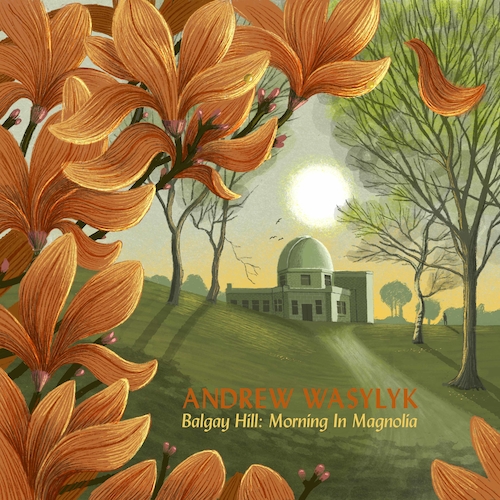 When we reviewed Andrew Wasylyk’s last album, Fugitive Light and Themes of Consolation, we commented that it was a fitting end to his recent trilogy (2017’s Themes for Buildings and Spaces and 2019’s The Paralian being the first two parts) exploring the sonic representation of the architecture of Dundee, its surrounding Angus coastlines, and general environs.

Yeah, so, he’s released a fourth one, making us either look presumptuous or innumerate. The eponymous Balgay Hill is a park in Dundee and Andrew has managed to make a flowing, atmospheric crest of a record. The listener feels submerged in the familiar environs of a Victorian city park, complete with the smell of grass, the rustle of wind through leaves, sweet birdsong punctuated by whatever you call that aggressive noise magpies make, and the faint threat of getting done in by a jakey.

If you’re not familiar with Andrew’s multi-instrumental landscapes, this record would actually make a good jumping-off point. As well as working as a grand opus moving elegantly between movements, there are individual tracks that have more independent ‘replayability’ outside of the context of the album. ‘Magpie Spring’, ‘The Ghost Who Never Arrived’ and closing track ‘The Morning of Magnolia Light’ all deserve to be prominent on your upcoming ‘outdoor’ playlists. The latter two boast subtle jazzy brass elements that will appeal especially to those who would normally hate subtle jazzy brass interruptions.

In summary, it’s the best fourth instalment of a trilogy we’ve ever heard, and it’s also the best thing Wasylyk has ever released.

Balgay Hill: Morning in Magnolia is out on 20th August on Clay Pipe Music

Things to do: Autumn in Fife