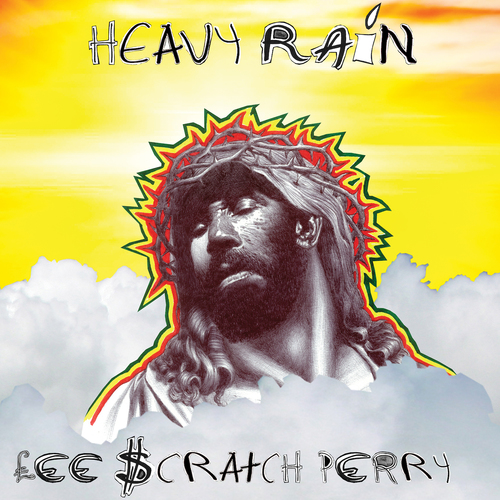 Some artists can measure their career by the influence they’ve had or the awards they’ve won. There seems little point in trying to compare anyone to Lee “Scratch” Perry. Yeah, he has a grammy, he’s had a solo art exhibition and influenced and worked with countless notable artists, but he also boasts a Jamaican Order of Distinction (Commander Class) and anyone with the slightest interest in music can readily tell you all about the Black Ark studio and its legendary ceremonial burning.

Following on from the summer release of Rainford, an album greeted as something of a return to form for the 83-year-old Godfather of Dub, Heavy Rain revisits those sessions and gives them a heavy dub slant as well as including a couple of brand-new tracks and a production triumvirate that’s enough to bring on an excitable skin condition in any vinyl head.

Long-term collaborator and UK dub heavyweight Adrian Sherwood was at the desk for both long players, but Heavy Rain also boasts the presence of Brian Eno as well as legendary trombonist Vin Gordon and Gaudi providing keyboards and theremin. Sherwood once compared Perry to Salvador Dali and that old quote reverberates with the Christ-like image of Perry on the cover by visual artist Peter Harris.

The album kicks off with ‘Intro – Music Shall Echo’ which is a fairly standard musically abstract intro track acting as a call to dub arms before everything really kicks off with the Eno re-work of Rainford’s ‘Makumba Rock’, the pleasingly titled ‘Here Come the Warm Dreads’. Where the off-beat, upstroke guitar chops normally sit in a reggae song, Eno and Sherwood have squeezed in compressed, squashed guitar samples and synthesisers that seemingly breathe as the track unfolds. Given Perry’s history of studio-based innovation, the filters, reverb and stereo swoops applied here could either be interpreted as homage or as a sort of audio photobombing – tapebombing, if you will. Either way, the result is a fat slice of chanking good stuff that will set your walking posture back by approximately 12 degrees.

‘Rattling Bones and Crowns’ lives up to its title with a bassline designed to shake spines but the real star here is Vin Gordon’s deceptively lively brass parts. Although not always at the front of the mix, the trombone still steals the show above the wash of wah guitar parts and delayed snare hits. Perry’s vocals in ‘Kill them dreams Money Worshippers’ sound even more at home here than on the original track.

‘Mindworker’ featuring a jazzy riff and toms filtered to the point of becoming watery blips, rumbles along at a relaxed bpm while Scratch proclaims himself a collector of souls and mover of brains. It’s probably the track that suits the album image best – reminding the listener of reggae’s spiritual roots.

Lead single, ‘Enlightened’ will probably be in the background of some undeserving cocktail bars come the summer but the very Wailers sounding backing vocals dancing in between effect-heavy harmonica lines could improve any social event regardless of the season. It gives way to ‘Hooligan Hank’ which manages to be disproportionately unsettling for its 60 second footprint.

‘Crickets in Moonlight’ is the album highlight, though. The original track ‘Cricket in the Moon’ was good enough but here it is shone through a sunny, hazy distortion. The brass manages to convey sadness and joy within the same phrases before the big hook will have the most prostrate listener on their feet. There doesn’t seem to be any sound in this mix which hasn’t got some filter with moving cut offs. It’s like a dream between eras – an internal communication of rich musical histories.

‘Space Craft’ might be the trippiest thing I’ve heard in a while. Almost abstract LFOs shuffle back and forth in volume levels while Perry waxes about African Starships. This is followed by two brand new tracks, ‘Dreams Come True’ and ‘Above and Beyond’. The former is a semi-conscious hot step through fuzzy, swelling synths with the outgoing refrain of a “Message to the righteous” ringing through the sticky groove. The latter starts off as the closest thing on the record to old school reggae rather than dub. However, by the end it has spread out into sprawling sonic layers which should sound as if they’re battling with each other but, instead, fold in on each other comfortably.

‘Heavy Rainford’, the closest thing to a title track, is a production geek’s wet dream. The introduction of the vocal hook from ‘I Am The Upsetter’ steals the show before the layered vocal harmonies in the last few seconds of the track smoothly fade out for Perry’s spoken word outro.

Is this Lee “Scratch” Perry’s finest album? Meh, probably not. Is he still influential to an almost mythic level? Yes. Is this 40 minutes of aural wonder, bombardment and smokey vibes worth your time? Several times over, yes.

“THE FILTERS, REVERB
AND STEREO SWOOPS
APPLIED HERE COULD
EITHER BE INTERPRETED
AS HOMAGE OR AS
A SORT OF AUDIO
PHOTOBOMBING”