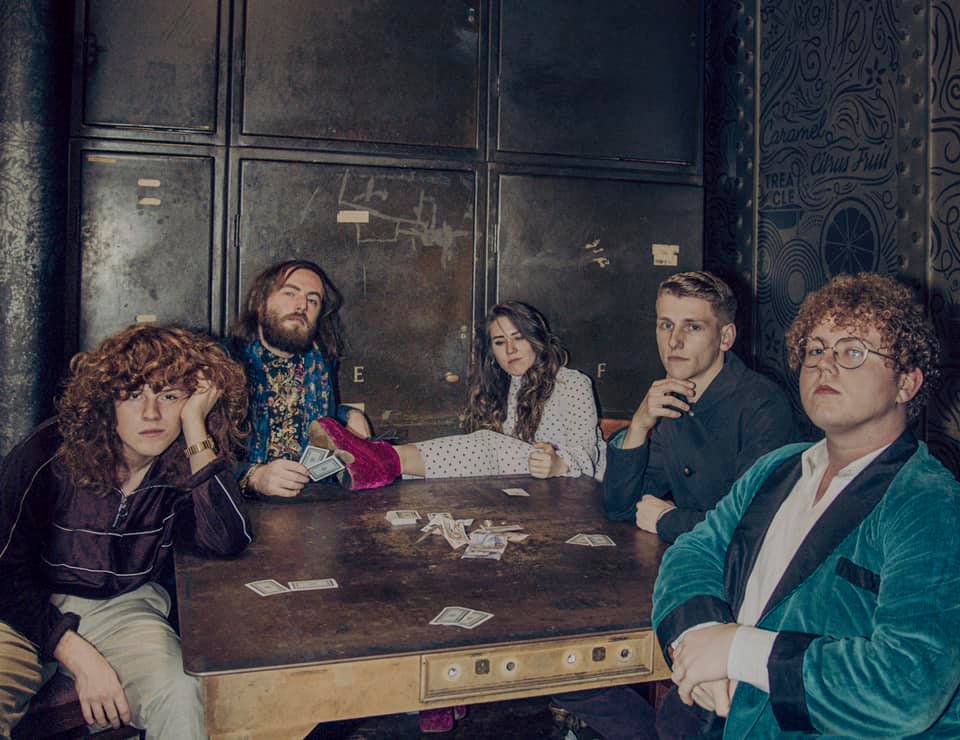 Fauves formed in Glasgow in 2017, their name inspired by Fauvism – an art style which is defined by a radical use of bold colours that separate them from their usual representational and realistic role, giving these colours a new and emotional meaning.

As the Scottish sun (not that one, don’t read it) began to set up residence for its annual game of hide-and-seek, Fauves had been gearing up for a series of gigs and summer festivals. With touring out of the picture due to lockdown the band have found some comfort in planning their releases for the remainder of the year.

Recently released single ‘Wither Away’ is a dreamy, atmospheric two minutes and 50 seconds of indie pop magic that is ripe for radio. The B-side ‘Bathe’ is seven minutes of dreamy melancholy paired with a yearning for better days. We caught up with Ryan and Ciaran from the band to have a chat about their new singles and what might lay ahead later this year.

Not to dwell but how’s lockdown treating you?

Ryan: Pretty much the same, minus working and going out. I’m made for this, I’m not gonna lie. It’s right up my street, haha.

Ciaran: I’ve been made unemployed through all this. I stay with my family so we keep busy in the house.

Are you getting itchy feet through not playing gigs?

Ciaran: I get uptight before gigs but recently I’m craving to get back onstage. You always want what you can’t have and certainly that’s the way it is right now.

New single ‘Wither Away’ with B-side epic ‘Bathe’ have received support from South America. You’ve also had airplay in Japan. How does it feel being so secluded and hearing news of your music being appreciated in such distant parts of the globe?

Ciaran: It’s mental being in a band just now still doing stuff during lockdown. It’s weird not having the affirmation that things are going well as you don’t have the shows and seeing the direct reactions of the crowd. But then you get Brazilian radio play so someone must like it. It’s a topsy turvy kinda feel being in a band right now.

Ryan: It’s surreal people at the other end of the earth are listening to the tunes.

In today’s streaming culture it’s highly sought after to be included in a platform’s curated playlist. You’ve recently been included in Spotify’s ‘Hot New Bands’ list.

The new tracks ‘Wither Away’ and ‘Bathe’ seem to take a new melodic and atmospheric direction compared to your previous work. Was there a change in the songwriting process?

Ryan: It’s funny because ‘Wither Away’ is three years old and was a demo previously played on 6 Music by Tom Robinson. ‘Bathe’ has been around a while and the original was more funky and not seven minutes long. Both tracks focus on relationships coming to a bitter end, something we can relate to and be sad about together.

Why sit on them so long?

Ryan: They were initially gonna be on an EP with our other tracks ‘Blank Eyes’ and ‘Floating Still’, but we just took too long to get them finished. We kept re-doing them.

Ciaran: They were chopped up to bits and then stitched all back together. We never had a sax player when we started recording them. Then we brought in my brother, Matthew, who eventually played the sax on it. We were overdubbing millions of things, we need to stop doing that dont we?

Ryan: I know, we end up taking so much time just adding wee bits. Jamie, our producer, was going aff his nut.

With ‘Bathe’, all the twinkly sounds you hear at the start and the outro section are a total accident. We loaded all these files in from an old session and it all started playing at once. After listening we thought – wow that sounds really cool, so we kept it in.

Ciaran: The tune is like Frankenstein’s monster, there’s been many transplants but we’re really happy with it.

Can you tell us a little bit about the video for ‘Bathe’?

Ciaran: Our pal Eric took the lead on that one. Kasparas and Eric are two halves of Humble Film Productions. Kaspurus does the filming and editing mosty but Eric wrote the script for this video for us. The pitch sounded amazing and they executed it to perfection. The mad thing is that none of us were even there for the filming, there’s only two seats in that vintage motor and none of us got in one.

Ryan: They’ve also got a film coming out soon called ‘Sunshine Periphery’ which we composed some music for.

Ciaran : ‘It’s a short film but it’s more like 20/25 minutes, so maybe a medium film. It’s shot in the desert in Utah. Also, Ryan has played the title role in their short film ‘Mr Swolo’.

Earlier this year you made a big step in signing to Glasgow indie label First Run Records. How’s that going for you?

Ciaran: It’s been amazing. One of the best decisions we ever made. You make a lot of flip-of-the-coin decisions in a band and you don’t know how it’s going to work out. We met them and we got on really well. I know Kayleigh (label manager) from uni years ago. They don’t intrude at all artistically and they just love the songs and help us get the music out to as many people as possible. Which we have been needing for so long.

Ryan: The extra bit of guidance is definitely dynamite, it’s good having some wise heads around us. With the support of the label we’re set to release a bunch of songs. So we won’t go quiet in terms of content to put out this year.

You can listen to/buy ‘Bathe’ and ‘Wither Away’ here.