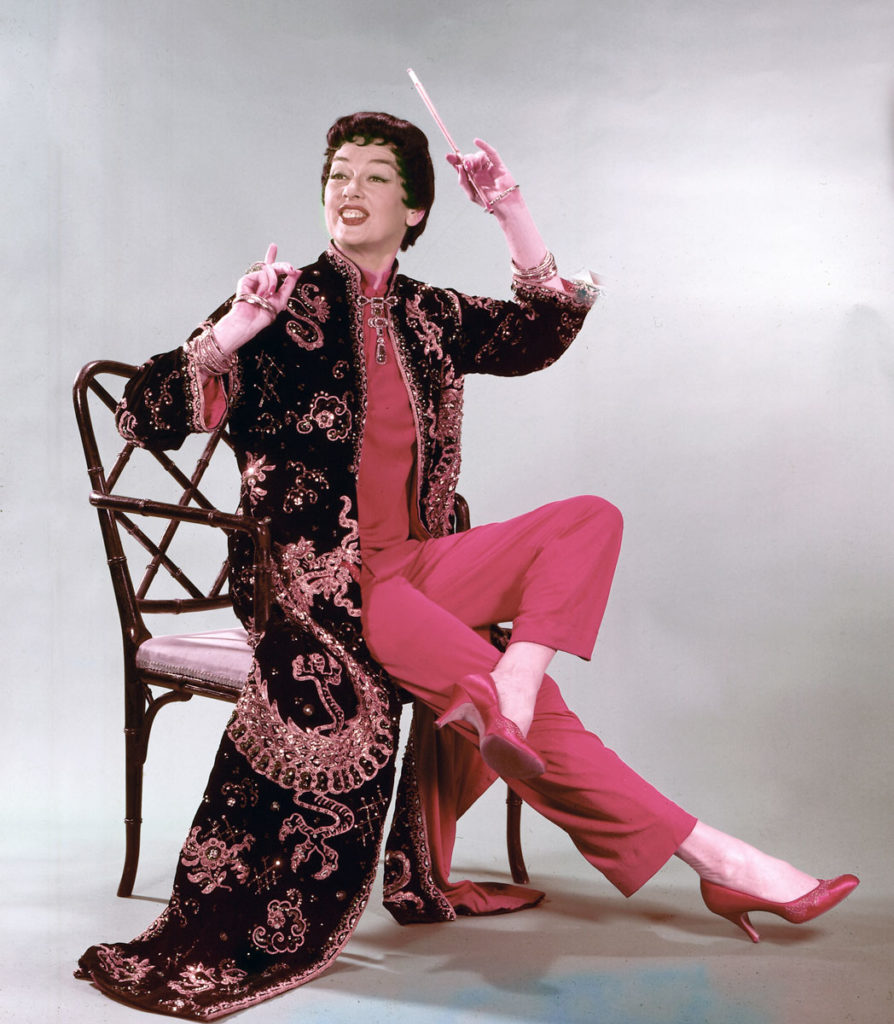 When I think of classic gay cinema, it strikes me that the films I adore the most are not always explicitly LGBTQ+ themed. Our new monthly movie club presents underrated classics that have captured the hearts of queer audiences for decades, even if they don’t appear on movie publications’ ‘quintessential queer cinema’ lists.

Whether or not it was the intention of the filmmakers, there are some titles which are, simply put, gay. There are so many variables that contribute towards a film earning such status: ice skating sequences, vengeful cheerleaders, outrageous costumes, characters being adjacent to Bette Midler, melodrama, camp…

One of the notable criteria is the story of a glamorous diva, someone who overcomes adversity and embodies the strength, glamour and wit we ourselves long to possess. And that’s where the 1958 classic Auntie Mame fits the bill perfectly. The appeal of Auntie Mame lies in so many separate components, not least the stellar performance of the woefully overlooked Rosalind Russell. A Golden Globe and Tony winner (and five-time Oscar nominee), Russell delivers a bravura performance as Mame. Having played the role on Broadway, she imbues the character with a relentless, contagious energy. The audience is always on her side, even when the world turns against her. Tilda Swinton has frequently been touted to portray Mame in a remake. She would nail the performance, but I fear she would lack the inherent warmth Russell brings to the character.

The plot, in summary, is as follows: a young orphan, Patrick, is placed in the care of his aunt Mame Dennis, an outrageous socialist and former Broadway star who delights in entertaining the city’s most eccentric, Bohemian characters. We meet her friends – such as the functioning alcoholic Vera, and Acacius, the headteacher of a nudist school – and she begins to introduce Patrick to a world of travel, curiosity and fun.

Upon their first meeting, during one of her famous wild parties, Mame instructs Patrick to ‘Take this piece of paper, and every time you hear a word you don’t understand, just write it down.’ He is exposed to theatre, travel, parties, fashion – in other words, I am furious she isn’t my aunt.

Conflict emerges when the executor of Patrick’s estate disapproves of Mame’s lifestyle and lobbies to send him to a prestigious boarding school. What follows is a tumultuous, endlessly charming journey that sees Mame survive the stock market crash, marriages, horse-riding shenanigans and personal attacks, some from within her own family.

At its heart, Auntie Mame is the story of an eccentric woman remaining authentic to herself in the face of conservatives objecting to her autonomous, frivolous lifestyle. Aside from the heart-warming plot and the chemistry between Mame and Patrick, the production value makes the film a visual feast. Mame’s impossibly stunning Manhattan townhouse, for one, is a character in itself. It is the epicentre for her outrageous parties, hosting stuffy in-laws and nursing hangovers, but its décor changes constantly throughout the film. The audience never sees the same set design in too many scenes, often reflecting a significant change in Mame’s life: everything is transient.

Orry-Kelly, one of Hollywood’s most distinguishable and successful costume designers, created Mame’s outrageously glamorous costumes. This film was made during the peak of Hollywood’s Golden Age, where the costumes and product design were staggeringly lavish. When it comes to Mame’s wardrobe, think Bianca del Rio on steroids. From the endless variety of her gowns to the wearable souvenirs from her travels, Orry-Kelly (the genius behind the costumes in Some Like It Hot, Casablanca and An American in Paris) creates such a vivid world through Mame’s outfits that you’ll be heading to Etsy straight away to nab a fascinator and (faux) mink stole of your very own.

What is it about Auntie Mame that resonates so much with queer audiences? On a base level, our hero lives the opulent, self-determined lifestyle that so many of us crave. And think about the time-frame: being gay in 1958 wasn’t exactly a bed of roses. Perhaps seeing Mame thrive in spite of every hard-nosed conservative in her life allows us to connect with her on a larger, more fabulous scale.

There are a handful of LGBTQ+ characters (mostly friends of Mame’s seen at her parties), but remember when the film was made. There were never going to be openly gay, well-rounded queer characters in Auntie Mame. That isn’t to say the film is inherently straight: it tiptoes around otherness sufficiently for a film made in 1958, and Mame actively surrounds herself with people who reject societal norms, pride themselves on being alternative and are, in some cases, clearly queer. A film that does so, in this era, deserves more credit for portraying otherness (or at least embracing a liberal, open-minded lifestyle) and celebrating what makes each of us unique.

Then there’s Mame herself. The character is so perfectly written: witty and urbane, with the dichotomy of steeling herself against criticism as well as being sensitive and surprisingly vulnerable. Like every gay icon, Mame strikes the balance between strength and vulnerability. Of course, she takes Patrick under her wing and introduces him to the finer things that the other, stiffer adults in his life consider frivolous, distracting or even degenerate: Mame is the ultimate cultural wing-woman. Every LGBTQ+ person deserves that one person who grabs them by the arm and assures them that “I’m going to open doors for you, doors you never even dreamed existed.”

We envy her lifestyle, her clothes, her wit, but more than anything we adore Mame herself, and we can hazard a guess that the feeling would be mutual. Auntie Mame possesses everything a queer classic needs: camp, humour, vulnerability, and heart (with the bonus of a glamorous leading lady).

You may not have had an Auntie Mame, but perhaps you could be one, guiding the next generation of queer youth to celebrate their heritage and the pop culture that has shaped the LGBTQ+ pioneers who came before them. And to end on Mame’s own motto: ‘Life is a banquet, and most poor suckers are starving to death!’