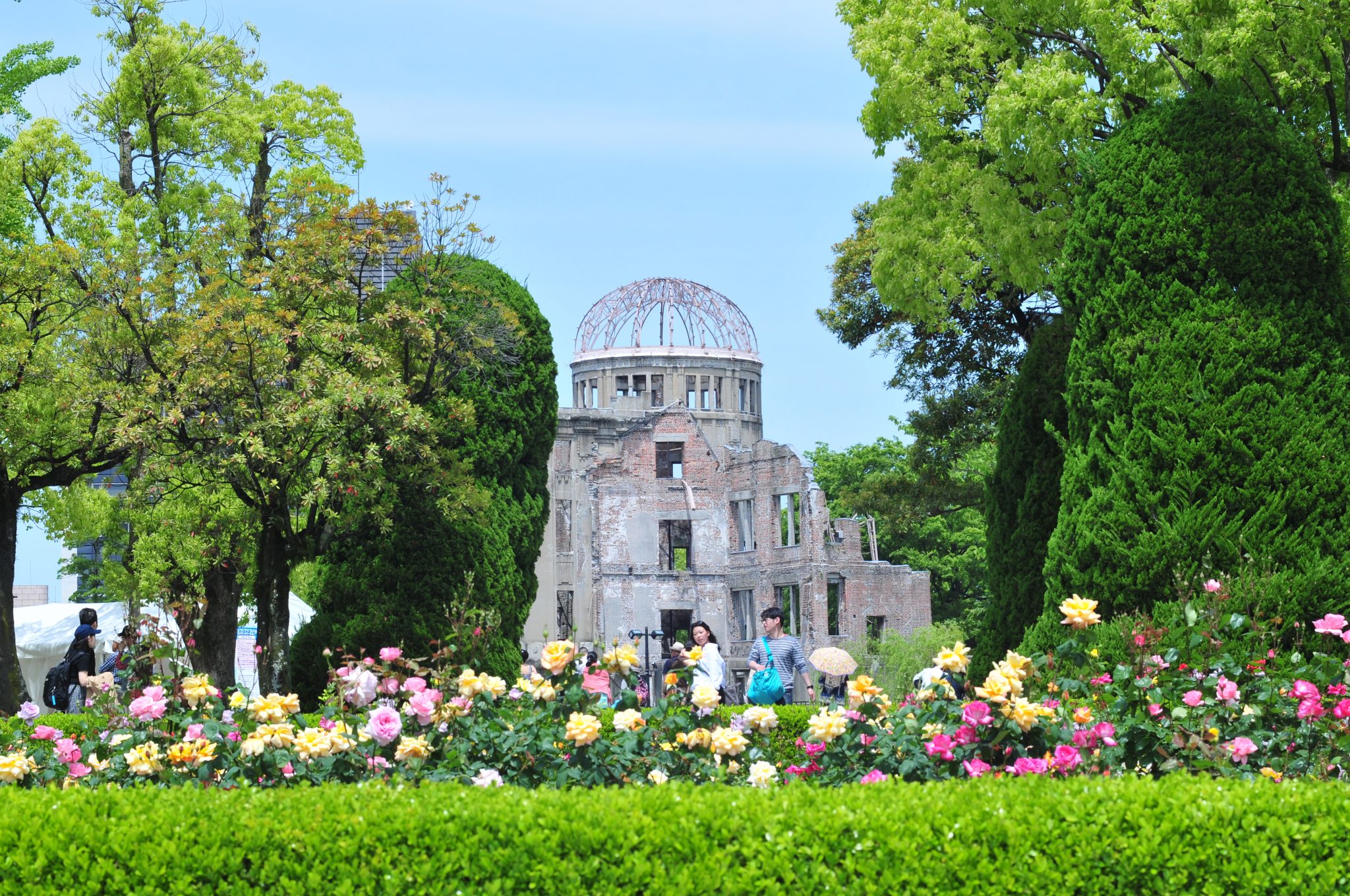 As astounding a city as it is, there’s a lot more to Japan than the bright lights of Tokyo. You’d be missing out if you only visit the capital. We seriously recommend getting a Japan Rail Pass (JR Pass) for high-speed rail access to the whole country. Discover a floating Torii gate, visit the Hiroshima bomb dome, watch the snow monkeys (all year round!), or chill with the feral cats on Ishinomaki (Cat Island). There’s also a lot more to Japanese food than sushi and ramen!

Speaking to others who have visited Japan, we always hear the same things – the amazing toilets, outdoor vending machines and reliable Shinkansen bullet trains. The bullet trains are a must do for travelling long-distance and with a JR Pass, you can get up to 1, 2 or 3 week’s unlimited travel across the entire national rail network visiting cities such as Hiroshima, Osaka, Tokyo and Kyoto. You also get free seat reservations, the carriages are split for those with reservations and those without. People tend not to pay the extra, meaning a reservation can mean a quieter, more spacious coach! Just remember that you can’t buy a JR Pass within Japan, you must purchase it online before you go and then pick it up from a designated location (e.g. Narita airport, where you will most likely land).

Along with your JR Pass you can also order a pocket WiFi device so that you don’t pay through the nose for internet. We ordered ours along with our JR Pass. The main restrictions with the JR Pass are that you can’t travel on the two fastest trains, Nozomi (top speed of 186 mph) and Mizuho (185 mph) or on private railways. The Hikari is the fastest Shinkansen you can take using the pass. With a top speed of 168 mph, it beats the 125 mph possible on the Pendolino, so it’s still very fast! You can also use your pass on the Miyajima Ferry (more on that later!) and the N’EX (Narita Express) train from the airport into central Tokyo.

There is so much to write about Tokyo that it deserves its own guide but we’ll give you our highlights. Underneath the main train station is an immense mall filled with restaurants and shops – look out for Character Street where you will find shops dedicated to Studio Ghibli, Hello Kitty, Lego and others. At street level you’ll find one of the many Kit Kat outlets selling exotic flavours (many are regional so look out for more on your travels). Also look out for the Ekiben bento box shops selling lunch boxes designed for long-distance eating! Again, the flavours you’ll find in the stations are regional. Shinjuku is where you will find the famous Golden Gai, alleyways crammed with tiny pubs and a possible inspiration for Blade Runner! If you want to get a view of Tokyo from up high for free then visit the Metropolitan Government Building. The South Tower is open during the day while the North Tower is open all day and night for night time panoramas. Between Shinjuku and Shibuya is Takeshita street and Harajuku district, where you’ll find many boutiques, quirky cafes and teenage girls dressed like dolls! Shibuya is worth visiting but the world’s busiest crossing is really… just a big crossroad. There are good bars, shops and places to eat around here. The first of many themed restaurants, Alcatraz E.R. opened here but has now closed. We preferred the Ninja restaurant in Akasaka anyway. Locate the entrance, watch for trap doors and let your ninja server guide you to your secret den where a scroll will be slipped to you….it’s actually the menu! Great fun but expensive, though the food is of high quality. In nearby Roppongi, known for its nightlife, you’ll find Ms.Bunny. One floor is a rabbit cafe, the other is a hedgehog cafe (watch out, hedgehogs are nippy!)
The 52nd floor of the five-star Park Hyatt hotel’s New York Bar, with its floor-to-ceiling windows and views to Mount Fuji is well-known from its starring role in Lost in Translation. Cocktails are surprisingly reasonably priced considering its iconic status. Look out for the L.I.T. cocktail, said to be pink to match the knickers Scarlett Johansson wears in the film!

Yokohama can be visited as a day trip from Tokyo and here you will find the world’s largest ChinaTown. Nikko is also a popular day trip destination but we recommend staying over to visit the Shinkyo bridge, Kanmangafuchi abyss and Mizo statues, Rinno-ji temple, as well as the Futarasan and Tosho-gu shrines – where you will find the original three wise monkeys (“see no evil, hear no evil, speak no evil”). We stayed at Stay Nikko Guesthouse, which we thoroughly recommend – you may even see monkeys in their garden! It’s a short walk from the train stations, but note that there is both a JR and non-JR line to Nikko so make sure you use the right one to avoid being charged!

Osaka was once the capital of Japan, but nowadays it’s the street food capital and so we headed here for Takoyaki (octopus balls), Okonomiyaki (like a savoury pancake) and Kushikatsu (deep fried skewered meat or vegetables). We also ate fugu (puffer fish) here in a restaurant which only sold puffer fish in various guises – with sushi, tempura etc. Don’t worry, it isn’t actually dangerous, unless you insist on eating the poisonous parts which are not used in cooking, or try preparing it yourself!
Another of Japan’s former capitals, Kyoto is just what comes to mind when thinking of Japan. The city escaped the destruction of the Second World War, so there are still temples, shrines and history aplenty. Memoirs of a Geisha was partly filmed here, including the Fushimi Inari Taisha shrine where the young Sayuri runs through the famous red torii gates. It gets extremely busy with tourists so arrive early. Also, wear comfortable shoes and expect to do a lot of walking! Look out for the many fox statues; the shrines here are dedicated to Inari, the Shinto god of rice and foxes are thought to be Inari’s messengers.  Pontocho alley is full to the brim with great (and cheap) street food. Nearby Nishiki market also sells food and everything else you’d expect to find in a good market.
Polite deer are the draw in Nara which, again, was an ancient capital of Japan! Nara Park is one of the oldest parks in Japan and is home to over 1,200 wild sika deer as well as the Tōdai-ji, Kōfuku-ji and Kasuga Shrines. Todai-ji, the largest wooden building in the world, houses a 50 ft tall statue of Buddha! Buy a pack of Shika Senbei (deer crackers) and the deer will bow for you in return for a cracker! Watch your bags, as the deer aren’t shy searching for extra snacks!

A visit to Yudanaka can cross off two Japanese to-dos. Snow monkeys and hot springs. The monkeys, Japanese macaques, live in Jigokudani Monkey Park which isn’t far from the onsen (hot spring) town of Yudanaka. On the walk to the man-made pool where the monkeys gather, you may encounter monkeys walking past, or sitting by the way. They don’t seem to mind their human visitors. The monkeys are around all year, but the best time to see them for that monkey chilling in a hot tub photo is between December and March when the snow is lying. After a long day of monkey spotting, relax in a Japanese bath. Some ryokans (traditional guesthouses) have their own. We visited Shimaya Ryokan which had two communal pools (one male and one female) as well as a dinky private pool. If you stay here they’ll also drive you to/from the monkey park free of charge! We took the railway from Nagano to Yudanaka, where there is a Snow Monkey express train, but note that the line here isn’t operated by JR so you’ll need to buy a ticket separately. We also recommend the food and beer selection from Hakko, mid-way between Shimaya and the train station.
Growing up during the Cold War and being terrorised by the film Threads when we were younger, meant we had to visit Hiroshima. First stop for us was the A-Bomb Dome, also known as the Hiroshima Peace Memorial. This area, once the bustling centre of Hiroshima is now filled with trees and lawns – a place for reflection. The former Prefectural Industrial Promotion Hall was one of the few buildings to remain standing. There is also a Peace Bell, Children’s Peace Memorial and Memorial Cenotaph with over 200,000 names listed. Hiroshima Castle is a 15-minute walk away and was reconstructed after the bomb, though you wouldn’t know it. You can also find a tree which somehow survived the bombing.

40 minutes outside Hiroshima, take a short ferry ride to visit the iconic Itsukushima Shrine on Miyajima (Shrine Island). At high tide, the giant red torii gate appears to float in the sea and at low tide you can walk out to it. Take the JR Ferry for free with the Japan Rail Pass and the Miyajimaguchi JR station is a 4-minute walk from the port (there’s another non JR station beside, so beware). If you can’t make it to Nara, then you can get your deer fix here instead. Wild deer wander around the island and can be found snooping about the shopping area in the evening.

We were smitten with Japan, from the trains to the toilets via the polite animals. Japan can be as relaxed or as crazy a break as you make it. There really is something for everyone!