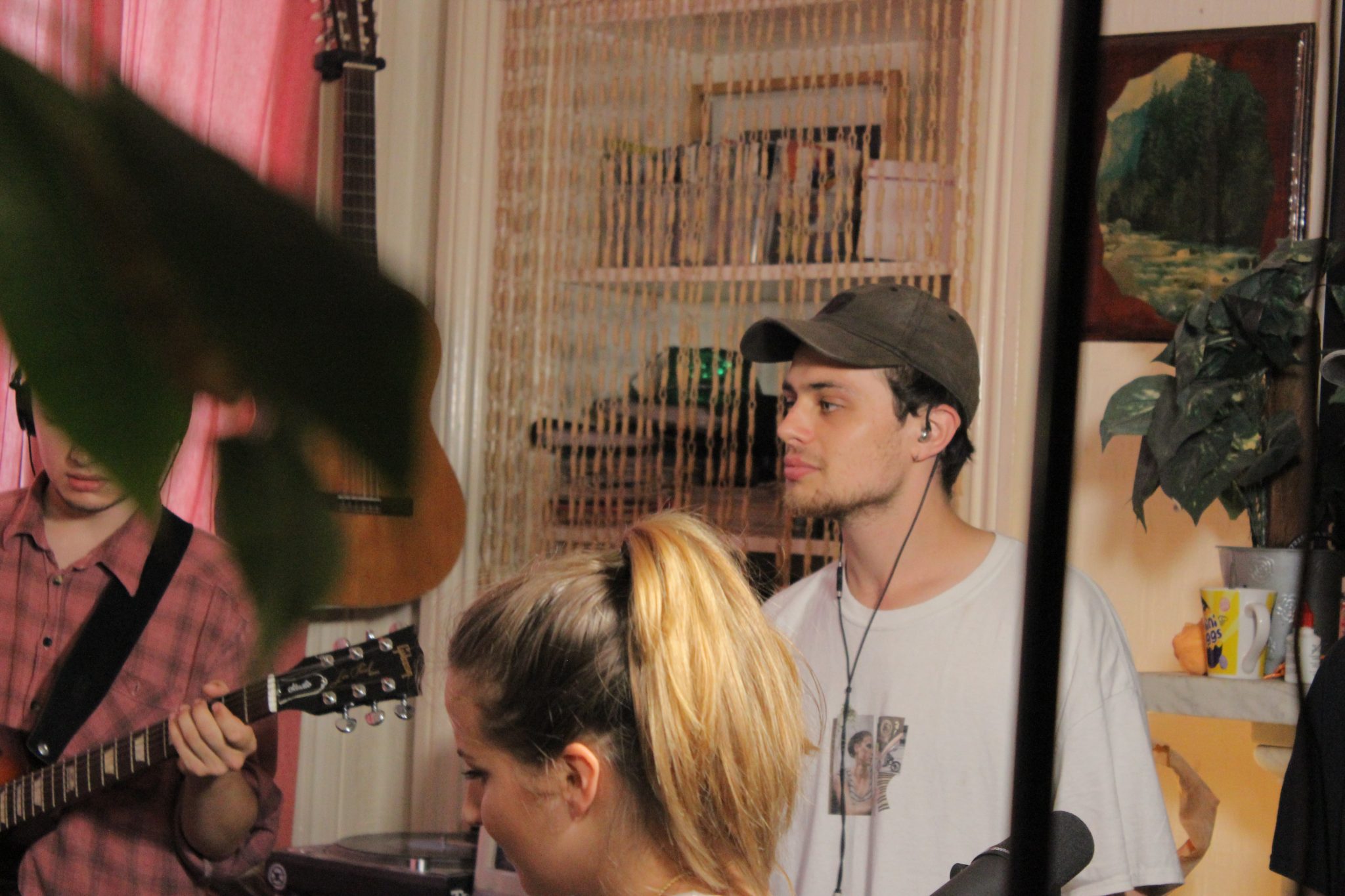 Liam Shortall is a multi-instrumentalist, musician, composer and producer. A band member and key player in the likes of Tom McGuire & The Brassholes, Graham Costello’s STRATA, Aku!, and Fat-Suit, he’s also played with The Scottish National Jazz Orchestra.

Always keen to push boundaries and experiment, corto.alto is his own ground-breaking project where he fuses his love of many different genres with jazz. Liam Shortall’s latest release with corto.alto, Live from 435, Volume 5, marks the conclusion of a year-long passion project. Nu-jazz, neo-soul, hip-hop, breakbeat, ragga, spoken word and scat all feature in an entirely impressive five-volume musical mosaic.

On the phone to us from his Glasgow flat, he chats light-heartedly on the topics of recording, awards, collabs, labels, and London.

How have you been?

I’ve been alright. Not financially, haha. I’ve been writing, recording, and arranging, which has been pretty good. After Live from 435 finished, which was mental for a year, I took some time off and chilled over a couple of weeks and then got back to it.

How did Bristol-based label Worm Discs get involved in Live from 435?

I released the first four volumes myself but it was actually on the second release that they got in touch. I’d had loads of messages from people around then; they [Worm Discs] would contact me on Facebook and I always just missed them. They wanted to do something but I’d said I’d look at it after I’d finished this project, after a year. We had planned to do a vinyl release but then COVID happened, so that all got put back.

The videos are filmed by Justyńa Kochaska, who is an ex-dancer. She has great rhythm and choreography, which translate into her video skills. With the changes, I’m lucky enough to have loads of friends who are sick at playing music. In total there’s about twenty people involved in corto and then we’ve had special guests as well.

There’s an advantage in playing with the same people every time, as you get used to each other, but bringing in new people can be exciting and can bring something unique.

Your latest guest is MOBO award-winning British saxophonist Soweto Kinch. How was it, having such a big name in the jazz scene on your record, and how did it happen?

I’ve listened to him since I was a kid, and always loved his music. I love that mix of jazz/hip-hop he has. His latest album is like New Orleans hip-hop and in the past he’s got into electronic and trap music – he’s always pushing boundaries. He’s a really good rapper too, so I’ve always wanted him to play and rap on a tune.

Agnese Daverio – the booker at Edinburgh Jazz Festival, who I’ve known through booking bands like Aku!, corto… All your bands… Haha yeah and Brassholes, and Strata. She [Daverio] was booking Soweto and I’d asked her if she’d put me in touch – they also have an artist fund which helped us with the collaboration and getting him involved.

How easy was it, working with him? Having someone you look up to playing a composition you’ve written?

I’d written the majority of it, apart from the rap. We were gonna do it together, y’know, record it live like the others, but because of lockdown we had to record it all separately. There’s three drummers on that tune with Soweto, two bass players, six horn players. It’s a big collaboration. I basically made a demo, got people to record their parts I’d written, and then they sent them back in and that was it. It was super easy.

Did it come out as you imagined?

Yeah, well, probably not at the beginning, but you kinda shift your ideas of what it’s gonna be like and it just gets better, so after Soweto sent me stuff I’d spliced and changed a lot of it. It’s interesting to get loads of people to record – it’s a lot of moving parts. I was really happy with the way it turned out. I was really happy when it finished because I was the last one [to record]. I was like ‘Get this over with!’.

And you write each individual part for each player in the band?

I write the score, then I write everyone parts and send them to them. Sometimes it can be loose around the edges, or quite detailed. For example, I don’t wanna tell a drummer – as I’m not a drummer – exactly what to do. I’ll write a rough piece, then they’ll take it and make it way better than anything I could ever come up with. I’m lucky to be working with people so talented.

What would they say about you as a band leader?

I’m pretty laid back, I think. You’ve gotta have a balance. I’ve been in a lot of bands where you go in and record for a singer/songwriter and they ask you to write them a part – they have no clue, they just want brass. The other end of the scale is where people are too specific and try to tell you how to play trombone. I feel like I’ve experienced both ends throughout my career.

For me, you’ve gotta have a real leader with direction and a vision. I’m always open to suggestions – you don’t wanna limit someone’s creativity. Maybe a different intro or a different drum groove. But if it’s shit, I’ll let you know. You’ve gotta have trust, and I trust everyone there. I wouldn’t have them there if I didn’t.

With Live from 435, I was never really attached to a release as they were so frequent. A release was coming out every three weeks. When recording, the mistakes are often the things you remember. If you try and go for perfect every time you’re never gonna get it.

You supported Joe Armon-Jones back in February this year, who was touring not long after releasing his second solo album Turn To Clear View. How was he to hang around with?

That was the first time I met him, that day. We’d done an interview on WW Glasgow, Rebecca Vasmant’s show on Worldwide FM. He’s a super nice dude and I’d love to do something with him in future – I think we will. His music is awesome and he’s such a good producer.

He’s not just playing straight-ahead jazz from the 60s – a lot of jazz is the type that’s just for jazz musicians, whereas his music is very open and accessible.

Joe is certainly a mainstay on the London jazz scene. You’ve also got the likes of Kamaal Williams, Ezra Collective, and Giles Peterson with Brownswood Recordings. Is there a resurgence of jazz? Or are people just paying attention because it’s nujazz, which has elements of hip hop or reggae and is more modern?

Fusion Jazz in the 90s/2000s was someone playing a keytar. Whereas now it’s definitely more fused with hip-hop and a lot of music that people already listen to. I think it’s a combination of the music being more accessible and more in line with the mainstream.

It’s also to do with the advent of Spotify; I mean people 10-15 years ago would maybe find one track on the radio, one time. Now people can find one track they like and an algorithm will suggest all this other stuff. I think robots are better than some old guy trying to tell you what’s cool and what to listen to.

Hmm…I’m pro-technology in communicating music. But I am not fucking pro-17 quid a month for 100,000 streams.

How important is bridging this gap between the London jazz scene and the rest of the country? Does it make it hard, trying to break through?

Going back to how you consume music – you could be living in Shetland and make good music and people will find it and buy it. If you’re good you can make the cut and break through. The London jazz scene has definitely resurged, but I think Glasgow has got a huge part to play in the future; like Bristol and Manchester, Glasgow is one of the cities trying different stuff.

We have amazing musicians here, the same as London in terms of quality. Unfortunately, we don’t have the same number of venues or labels like London. It would be great if there was a jazz label up here and I think someone will start it. Maybe Rebecca [Vasmant] – who knows.

Running a label isn’t the most tempting business model – especially a jazz record label. But if you were the first one in Glasgow, with so much going on right now? Look what Brownswood and DeepMatter have done in London, and they’re making bank.

Where do you rehearse these days?

We’ve got this mad space in Maryhill; I rehearse there with corto. alto as well. It’s run by this guy called Zambo who’s a fucking nutcase. He has this warehouse and he’s building a studio there. We’ve got a sweet deal to get this practice space.

So much, we’ve written so much music. Tom has 18 new songs. Some are in the early stages and some are almost done. Tom has spent a lot of time in lockdown writing and now everyone is just getting back to rehearsing again, so that’s exciting.

How does Tom compare to yourself, with him also being a band leader?

He’s an amazing songwriter and very passionate. Tom’s really good at writing bangers. We wrote the bulk of the last Brassholes album together. It’s such a fun project and different from what I normally do. It gets me back to what I started doing: jazz, funk and trombone playing. I love funk and soul, so it’s indulgent for me as well.

Yeah, it’s nice to have a band where the performance is so much about bringing energy and a real feelgood atmosphere. It’s something I really enjoy doing.

Finally, coming up are the Scottish Jazz Awards. Five possible awards to be nominated for and you are up for four of them. That’s pretty impressive. You’re missing out only on ‘Best Vocalist’.

I’m actually pretty gutted I didn’t get all 5 nominations, haha. My dad asked ‘Why aren’t you singing?’. I feel awards in music are nice for the recognition and it’d be nice to win but I really don’t want to win all four that I’m up for.

For corto.alto though – I worked my ass off, so I would appreciate the recognition there. I think I know everyone up for the nominations, and everyone is totally deserving. It’s cool to be nominated, but I’m just making tunes, really.

All five volumes of Live from 435 are available digitally now on Worm Discs, including latest single ‘Is That It?’, featuring Soweto Kinch.

Keep your eyes peeled for an Aku! album release at the end of the year, featuring Harry Weir, Liam Shortall and Graham Costello, also on Worm Discs.