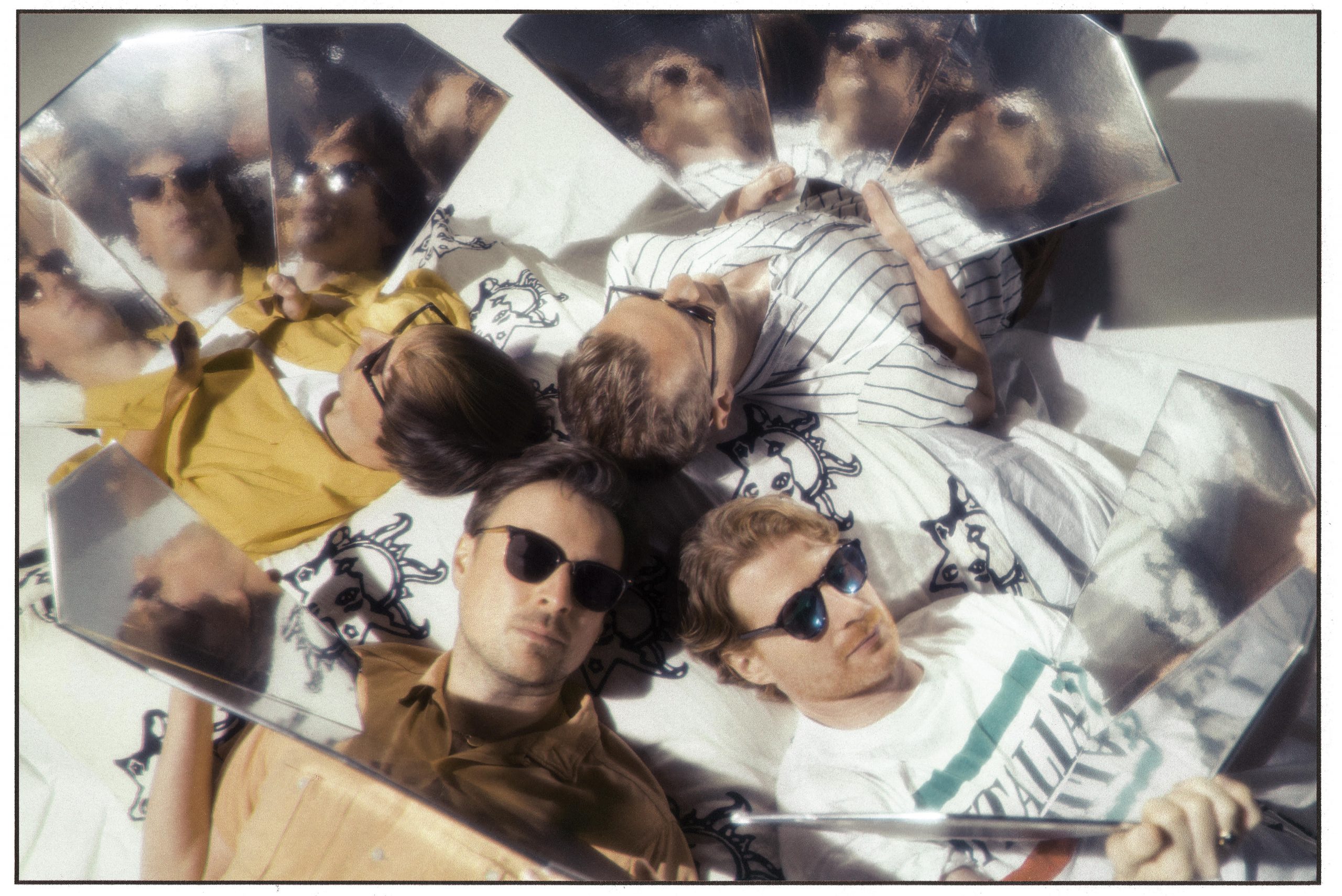 Django Django are back with their fourth album Glowing in the Dark (we’ve a full track-by-track here, if you’re wanting a taste of what to expect). We caught up with David and Vinnie and talked about how it all came together, the challenges of translating some of their recorded tracks to a live setting, and the importance of small to medium venues to the music ecosystem.

How are things with you both?

V: We’re in the studio at the minute, working. It’s good, just writing. We’ve got a lot of tracks we’re working on, getting them finished up and stuff.

Glowing in the Dark: in a lot of ways I’d say it’s got a similar energy to your first album.

V: A lot of friends have said the same kind of thing. It does have a positive kind of outlook, I suppose, in some of the tracks. It changes through a lot of gears. We’re happy with it, positive about it.

As always with yourselves, there’s a huge amount of different ideas and influences thrown in there.

V: Yeah, there’s tracks like ‘The Ark’ [grooving bubbling jungle acid] against things like ‘The World Will Turn’ [lush vocal harmonies on a bed of picked acoustic guitar and sweet strings]. I think that’s something we’ve done from early on; all four of us are writing and we’ve all got different things we gravitate towards, musically.

So, we bring those different areas together. And once it’s played by us and recorded by Dave, it kind of unifies them and makes something that sounds like us, at the end of the day. Someone will come with a starting point. It might be a sample from a record or a little riff.

D: Yeah, just someone will come with a starting point, and maybe a sample from a record or a little riff or something like that. And then we try and build up and build around. And yeah, I think we do that more than jamming. But sometimes we’ll jam out a song between the setlist tracks, you know, we’ll start a little jam and that’ll become something. But usually it’s that people have started their own little idea at home, and then they bring it in and build it up.

It sounds quite democratic.

D: I think so, yeah. Because as Vinny says, we’ve all got our different things, you know. I’m into sampling and drum machines and dance music. And I won’t sit with an acoustic guitar. But then if you bring those two things together, you’ve got something. We’ve all got our little ways of working.

How’s it been, the last year, not being able to tour?

D: Difficult. I mean, it’s hard to function as a band, as a business, without live touring and festivals. So it’s definitely a struggle. I guess the only upside of it is just more time to write and more time in the studio. But yeah, every musician and everybody in the creative industries is feeling it.

Were you tempted to hold back on releasing the album?

D: I think this one has been pushed back a bit. Because no-one quite knew, when the lockdown started in March. There was talk of it being done by summer, and then it just kept going on and on and on. So things did get pushed back. We just started thinking [laughs] ‘this could go on for years, let’s just start putting things out.’

D: Brand new stuff and stuff that didn’t quite make the last album. We’re trying to tidy up loose ends of tracks that are needing a chorus, or whatever it is. Getting them up to scratch to put in the done pile.

I guess that’s a thing, to know when a track is finished and it’s not like Father Ted’s car where you keep chipping away at it and it ends up a monster?

D: Yeah, we definitely have lots of Father Ted’s cars in the garage. You get to know when a song is at the right level and you can put it to the side – all the broad brushstrokes are done on it. So that’s what we’re trying to do.

Did you go in with a plan of how you wanted the album to flow? Or was it similar to what you were saying – you come in with ideas and, once they come together, that’s the album?

D: Yeah, I think it’s once you’ve got a body of work that makes sense. Then you say, right, this is an album. But we’ve never really been one for trying to get a sound that carries a whole album. Each track lives in its own little world, usually. And we’ve never gone into the studio and recorded an album with the same guitar setups or pedals throughout. So usually our albums just chop and change.

I guess, Vincent, your vocals tie everything together and that allows you to go off in all these different directions, to keep it cohesive.

V: We’re trying to push ourselves on, make sure we’re not repeating ourselves. Whether that be a subject matter for a song or the kind of style or rhythm that it’s on it. You’re just looking for these gaps that you haven’t already filled. On the fourth album a lot of it is that. But also, when we go to write an album, the stuff we’ve done on the last one, we want to move on from that a lot. That has the potential to push you into a new space and a new kind of outlook.

You’ve worked with Charlotte Gainsbourg on this one. On the last album you worked with Rebecca Taylor [Self Esteem]. Is the introduction of a fresh vocalist something you like to do, to have a break in the sound?

D: If we have a track and it just sounds like someone else could be singing it, then we’re happy to put it to someone else. More and more, we like to do that. Because sometimes we write things, it could be a hip hop track, and we need a rapper other than a singer. These kinds of collaborations keep us entertained and excited as well.

V: It freshens an album as well. If it’s just me or Jim singing across twelve or thirteen tracks, having somebody else in to guest can be a bit of a palate cleanser. Also, with that track that she sang on, I think a lot of the lyrics have this road movie-like imagery, and it lent itself to a female vocalist coming on there. We were really glad that she OK’d it and went with it.

To me, it’s an album that’s easy to imagine hearing it being played live. Do you think it will be easy to translate to that setting?

D: The single that’s out now, ‘Glowing in the Dark’ is already a struggle to play live [laughs] cause it’s got that ‘Default’ thing of the chopped vocal and a looped drum beat. But yeah, tracks like ‘Headrush’, ‘Spirals’, ‘Asking For More’ are already quite fun to be playing live. Is ‘Default’ still a difficult one to play live then?

D: Oh, yes. We’ve still never figured that out. It’s a nightmare. I remember we’d only just put it out and hadn’t figured out how to do it. Then we had to go on Jools Holland and play it. And I always watch that back and think, yeah, you can tell we have no idea [laughing]. Because it was made in a bedroom out of samples and a chopped vocal. So how do you then take that live? It can be tricky sometimes, when you work like this.

Have you got plans for a tour later in the year?

V: Yeah, I think there’s talk about autumn: September, October. Things are looking more certain now there’s a vaccine en route. We just listen to our gig booker, really. He gives us the most realistic situation. Hopefully post-summer, stuff will come together.

D: There’s places we’re dying to get back to, like the Liquid Rooms. We really like these certain sized venues, where we can contain an atmosphere and a buzz. I think the first shows back are gonna be quite euphoric for everybody. Fingers crossed that happens next year and this doesn’t keep rolling on; false promises and whatnot. But I can’t wait to be playing these new ones.

It’s been a tough year for the smaller venues.

D: Personally, I enjoy those sized venues; they work because of the type of band we are. We didn’t write songs to play in stadiums; we didn’t write a kind of slow, bombastic, epic record. Because we came out of doing a lot of warehouse parties, that’s what we like doing. Clubs and parties. That’s what we still enjoy. And without those Tut’s sized venues, you just wouldn’t get grassroots bands coming through.

If you only have big, big venues then it’s very difficult for bands starting out, and for bands like us who have a certain style of music. So, yes, it’s important.

Is there a lyric that sums up or ties the album together for you?

V: [Laughs] Yeah, it was quite a long time ago. Well, it feels like it anyway. I suppose there’s always an aspect of escapism which appears in a lot of our music. It’s probably something in that kind of ilk. A track like ‘Spirals’ came out of the setting of Brexit and Donald Trump being in power. The backdrop of things having been quite divided and the rise of dubious governments across the world. Tracks like ‘Hold Fast’ and ‘Spirals’, we’re trying to hark back to an idea of ‘things will be okay’, and that things will eventually pass. 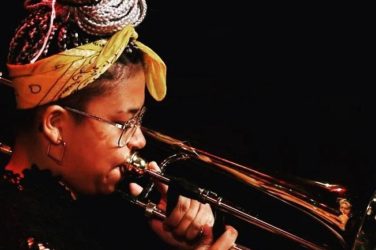