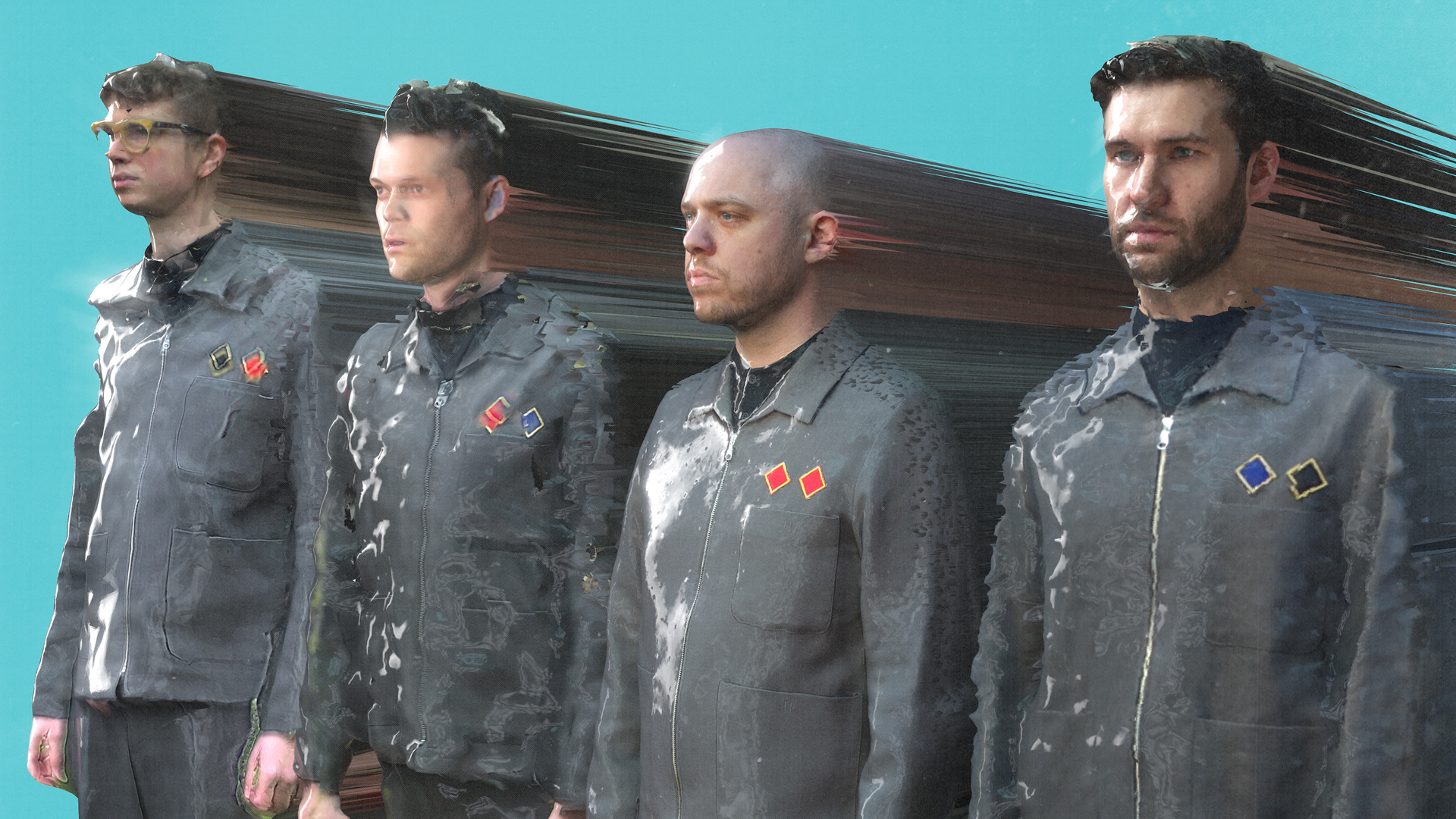 Bringing us more of their lyrically captivating and continuously inventive music, Everything Everything are back with their fifth album Re-Animator, out on 11th September. ‘Arch Enemy’, their recently released single, is a poignant commentary on real-world humanitarian issues. The lucid ‘other’ world captured in the 3D animated music video brings the darkness of the lyrics to life.

We chatted with band guitarist and joint song-writer Alex Robertshaw about everything Re-Animator, releasing work without being able to tour it, and the problem of human nature.

Do you feel it’s going to be a different experience, releasing Re-Animator, than with previous albums?

It’s already been very different in terms of the way it’s come out. Only existing online…it’s a strange way to release a record. For the last year Jon and I were basically hermits, writing the record. It feels like the longest year ever. Usually we would be on the road supporting it. It’s different, but I’m not particularly disheartened or anything. I’ve really enjoyed how I’ve been lucky enough to spend more time with my child.

I was watching your new videos for ‘Arch-enemy’, ‘Planets’ and ‘In Birdsong’. Were you involved in the animation side of things?

No, Jon did all that. When it looked like we weren’t going to be able to get together to do anything, Jon just decided that now is the time to get into animation [laughs]. We’ve got a group of friends that helped in the making. We just managed to get together and do a music video not too long ago, which was sort of a strange experience since we hadn’t seen each other in so long. I think with animation you can actually say a lot more than you could ever say in a performance video. There is definitely a light shone on the lyrics in that sense.

I was reading that you streamlined the creative process by focusing on harmonies and melodies over synths and programming. Did you find it easy to stick to this new way of working?

I mean, it’s as easy as you want it to be. I wanted to write songs that I could just get the acoustic out and play and Jon could sing. I was listening to a lot of The Beatles and all these bands that probably wrote songs in more of a singer and songwriter way before finding a way of presenting it that’s more interesting. I think in the past we’ve done wild things before the song is finished, and then we’re having to find our way around the song with all this crazy production stuff.

It’s not a bad way of working, it’s just one way of working. This time around we wanted to do something that was a more classic way of writing. I really enjoyed it. There was a lot of pushing myself to write stuff that was musically a bit trickier. It was about trying to be playful in the writing rather than in the production.

All the production stuff happened anyway, it just started from the point of view of me sitting with an acoustic or electric guitar and playing. So it was a very bare bones starting point.

I read that a lot of the inspiration behind the album comes from [pioneering American psychologist] Julian Jaynes’ Bicameral Mind Theory. I could definitely hear this split brain theme run throughout the entire album. Was this the intention?

Yeah. Jon wrote an email to the band quite early on in the process, being like ‘this is what I really want to do, this is what I want to write about.’ At one point he wanted to make a double album where each album would represent a half of the brain. So he’s really into it. You know, you have to sing about something you really believe in or something you’re interested in. It’s nice when Jon is passionate about stuff…you have to continue learning and finding new things, to keep it interesting and to improve yourself.

It’s apparent that much of the focus of Re-Animator is on human connection with nature. Like in ‘Violent Sun’, ‘the wild wave comes and we’re swept away’. Do you feel that, in the current situation, you’ve been able to reconnect with nature?

Since lockdown happened we’ve all managed to reconnect with nature a little bit. I’m actually not really looking forward to planes being in the sky again [laughs]. Losing all that fresh air, walking around the countryside. It’s nice, there was a time when there were literally no cars on the street. It’s been quite incredible, to be honest.

I watched an Instagram Live with [band members] Jon Higgs and Jeremy Pritchard, and how they responded to a question about the name of the album. They defined Re- Animator as ‘one of those moments that makes you wake up and come alive’ – forcing you out of routine and such. Have you had any Re-Animator moments recently?

I think the last big change in my life was having my child. That completely changed the way I live my life, really. Now I’m essentially just here for my daughter; she’s awake, I’m awake. It’s definitely changed my outlook. I think as a band, musically it relates to that. We’ve gone back to our roots in terms of writing music, trying to get back to square one and learning a bit more. We got a new label, so a lot of things are new on this record. It just felt like the right time to try and be fresh.

Are you able to prepare for a tour yet?

We’re in a situation now where it’s quite tricky. We’ve never played any of the songs before together, we’ve just recorded it and everyone has played their own parts. So we don’t know yet what it’s going to be like to play this live together, there’s a lot of stuff to work out. We’ve done these sort of live stream things to play together but it’s just not the same. I just don’t know what’s going to happen. I feel like there won’t be any tours until next year. Hopefully we’ll be back on the road and we’ll be able to rehearse for this soon. Right now, every couple of weeks we’re just talking about it and trying to predict something.

Have you found it difficult not being able to play Re- Animator to a live audience?

Yeah, I mean it will happen next year. But playing a gig is a total luxury. It’s not essential for anyone to come and see a gig or for us to play gigs, there’s much more important things going on. Eventually we’ll be back out. The idea of being out and there still being a place where we can play is actually more exciting than the prospect of playing.

Do you think that enough has been done to support the music industry during this time?

From what I understand they’ve released some money for small venues, but it didn’t amount to very much. I don’t think music’s at the top of the list, even though it does bring in a lot of money. I think everyone’s been hit pretty hard. As soon as things start to improve in the world then everyone will start rebuilding. It’s going to be a big shame if we lose some of these smaller venues.

It’s very strange, because I generally avoid social media at all costs. I just don’t have enough time in the day. It’s been quite nice to release a single, then the same night we’ll have these Q and As. It’s nice to talk to people.

Usually we play a show and then we talk to people afterwards…that’s a fairly natural and nice way to meet each other. Meeting people face to face is always going to be better. At least online I can have a conversation with someone in Mexico, so there is a positive in that sense.

I think it’s interesting that the lyrics that have been written and recorded before the pandemic now take on a new meaning and could be interpreted differently.

It’s a bit of a problem. We were worried people would do exactly that. The lyrics are more about climate change though, which conveys the bigger picture of the whole thing. I’d hate for people to think any of our lyrics were insensitive towards what’s going on right now. As soon as Get To Heaven came out Trump came into power and Nigel Farage was around… it’s nuts.

You mentioned the theme of climate change: do you feel this is something that as a band you aim to speak out on?

We care about the environment and we think it’s a good idea to recycle and look after the environment. We’re not total activists. Jon is really talking about humans being greedy and not realising how much damage they’re doing just by being humans. Human nature is a problem in itself; we really need to look at ourselves.

Re-Animator, will be released on 11th September. 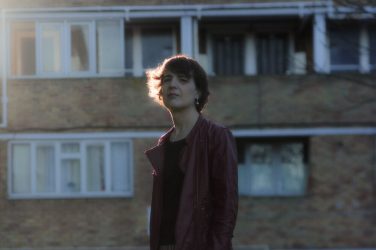 At its heart Songs of Resilience is very like its artist – eclectic, charming, ...