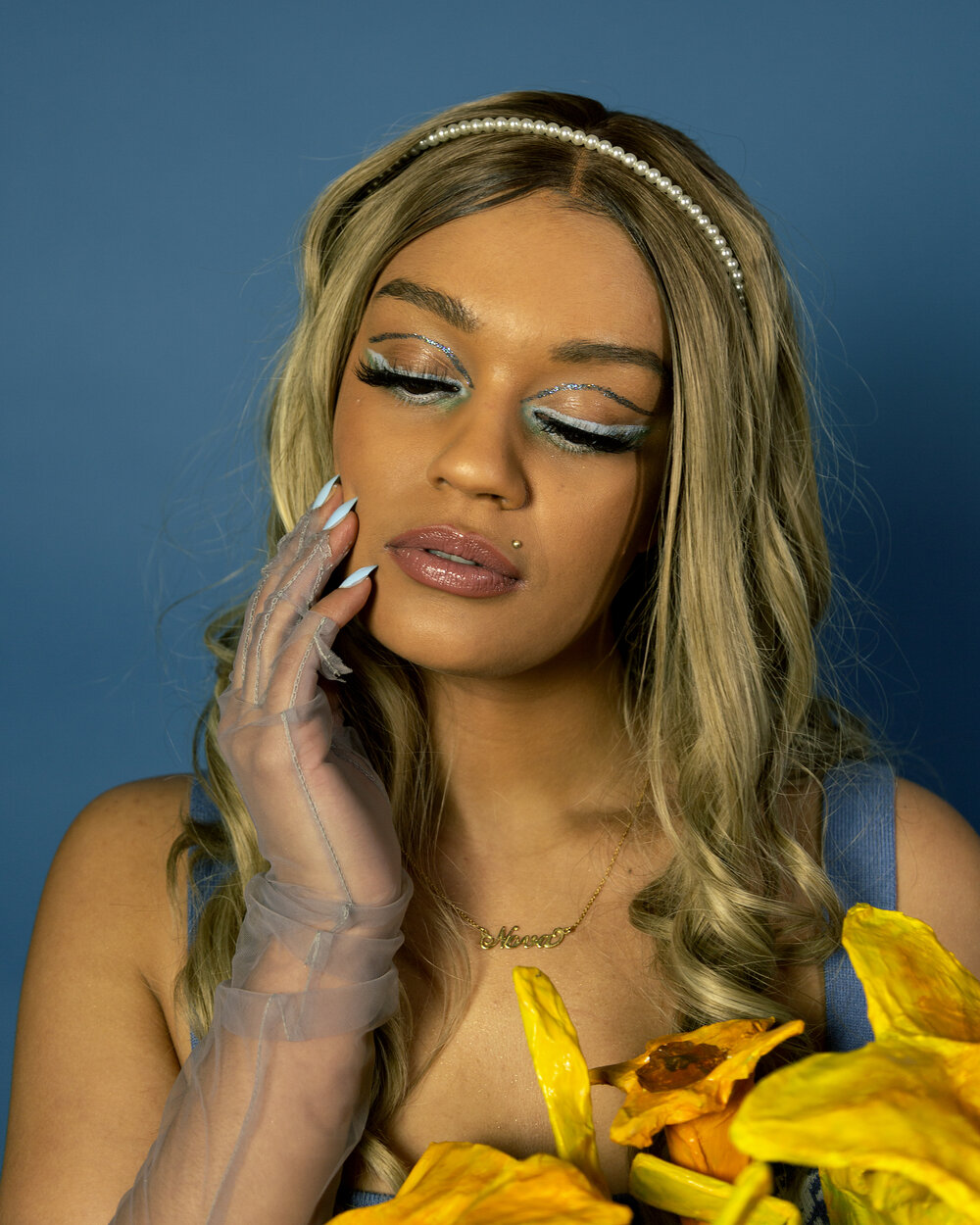 Rising to the forefront of the Scottish music industry after earning the coveted title of Scottish Album of the Year 2020 with Re-Up, is London-born, Edinburgh-raised rapper, singer, producer, and DJ Shaheeda Sinckler, aka Nova.

Nova has been revealed as part of the line up for HANG (Hip-Hop Aimed Networking with Grime), Scotland’s first ever hip hop and grime conference.

HANG aims to empower members of Scotland’s hip hop and grime communities and celebrate the diversity of voices reflecting the country in the 21st century. Ahead of the inaugural event, SNACK chatted to Nova about her rising prominence, latest EP WWND?, her involvement in HANG, and her evolution as an artist.

A version of this interview first appeared in the July 2021 issue of SNACK. You can order a physical copy of the magazine here.

It’s been a crazy year. How has your creative process changed from pre-pandemic to what it is now?

I’ve got more time to work on songs. I’ve been working on writing a song in one session. Before that I would write over weeks or something because I was busy, so I’ve been building up confidence in that. It’s really improved things a lot. It marries the lyrics and the beat much more if I go with the flow, rather than trying to have a set idea.

I’ve been able to collaborate with people just through sending files online. And luckily I had equipment and a microphone so I could record demos. I did record some songs at home that I released last year as well. So yeah, there’s been a lot of stuff still going on.

I watched your Live in Leith gig a few months back. How was it performing to an empty auditorium? That must have been really bizarre.

The bizarre thing about that one is that it’s one of the most professional gigs I have done in terms of career, the venue, the lighting – everything. The stage was massive compared to ones I’ve performed on before. So it’s a strange juxtaposition of doing the most professional gig I’ve ever done, but with no audience. It would have been great if there was one, but it was still a really good experience.

Were you nervous at all even knowing that there wasn’t a crowd out there?

Yeah, I get nervous about everything.

How does it feel to be part of the HANG lineup alongside some of the most vital names in the Scottish hip hop and grime scene at the moment?

It’s cool. I’m anticipating what it’s gonna be like, because it’s a hybrid of in-person and online performance and discussion, and also of local and national talent. So it’s going to be interesting.

You’ve risen to prominence quite a lot over the last few years. It must be quite cool knowing that you’ll be alongside these key names?

Yeah, Tiffany Calver, she’s a woman of colour in music who’s done really well, so I look forward to experiencing what she has to say. I’m also very excited for Fliptrix from High Focus. That’s quite a moment for me, because I used to listen to him and the High Focus lads a lot when I was young. So that’s quite a big deal.

Do you think that HANG is a much-needed development for the Scottish hip hop and grime scene?

Yeah, I think it’s good. But I feel like the language of it is still slightly limiting, how it’s just about hip hop and grime. I feel like Scotland needs to kind of move towards more music of Black origin, instead of just hip hop. Hip hop has been the one that’s been going on for decades now in Scotland.

Then more recently they are putting grime into the conversation, but there are so many other genres of Black origin that are super popular and are getting made in Scotland that wouldn’t really fall under hip hop or grime. You’ve got drill, trap, Afrobeats and all of that. They don’t really come under the same bracket. And there’s R&B singers and soul singers. So, yes, it should be cool, but I feel like there’s still some people getting left out.

Do you feel that the gender balance within the scene is fair?

No! There’s very few female rappers. There’s also a culture of hostility towards female artists, especially being a rapper. I feel like if I was a singer-songwriter it would roll with what people respect. And in the process of making music – like producers, engineers – there’s not a lot of women making beats.

What was your writing process for WWND?

That was the first main project where I was just doing that improvisation kind of thing, writing the songs in one session. l got sent the beats by $1000 Wallet, the producer, and then I picked different ones and wrote over them. I recorded the demos of them at home and then recorded them in a home studio with Andra Black.

It was an autotune project as well. So it’s the beginning of me starting to properly sing in music. I’ve been doing a lot more autotune and it’s good, because I feel like it’s improving my skills as a vocalist. Even though it’s autotune, I’m still testing my voice and moving in a skilled direction.

I noticed that on the most recent EP you seem to be exploring different themes, some more personal and more emotion-driven. Is there a song that you feel that most resonates with you?

Yeah, that would be ‘Be Free’. The lyrics are just true – it is about an ex that wouldn’t stop calling me. Also, I didn’t manage to get a demo version recorded, so I literally just had a thought in my head. I went to the studio and started doing it. I was unsure because there wasn’t a version before, and when I started recording I thought it was gonna turn out, you know, awful.

Once I got warmed up into the flow, it turned out so much better than I imagined. I thought ‘Grime’ would be the crowd favourite, but I think ‘Stay Blessed’ has the most streams.

I can definitely imagine ‘Grime’ setting off a crowd, for sure. So how does WWND? differ from Re-Up?

It’s very different in terms of the sound and the style of it. I’m more comfortable with exploring different topics, different sounds. I used to want to be really hard. I wanted to be like one of the guys and have a more masculine energy, I didn’t want to talk about love, I’d rather talk about how I didn’t want love.

It wasn’t just in music as well, this was more of an overarching thing that was affecting lots of stuff, like how I would dress and everything. But then over time I felt like I was cutting myself off from a part of life that’s great and enjoyable, a part of my identity as well.

Did you feel like any of these restrictions that you put on yourself may come from being in an area that was mostly male dominated?

I think so. It started when I used to go out when I’d turned 18. Girls get dressed up to go out but I started to feel like I’d be perceived as weak if I really tried to look good. I had this insecurity that if I tried, I would always fall short of being that girl and I would just look like I was trying. So I just wanted to wear a tracksuit and stuff. But I’ve changed a lot in the past couple of years. It’s been really fun actually.

What is the general reaction to the new EP and you being more of yourself?

When I first started music, whenever I’d say that I am a musician, people would be like, ‘Oh, you, you’re a singer?’ No, I’m not. But it’s quite ironic that I am starting to do that now.

I’ve become inspired by other artists that I’ve found just through life and social media. I was also watching loads of Love & Hip Hop, it’s a reality TV show, but it’s also got the music component in there. It’s mostly Black American people and I thought it was really cool. There’s also other female artists, like Ivorian Doll, who are super girly and super powerful as well. So seeing people like them has definitely helped me come into my own personality more.

Did you have any expectations of winning the Scottish Album of the Year award?

When I applied I had zero expectation to win. Then I found out I had made a longlist and that was cool. I was quite agitated because I didn’t know if I was going to get to the next stage. And after I was shortlisted, I thought maybe I could win. I was just kind of looking at the cultural landscape of the world and artists like Megan Thee Stallion and Cardi B who had massive hits, so female rappers are pretty big right now.

Do you feel that you have an opportunity to give artists from the scene and from similar backgrounds a hand up?

I hope so. Sometimes I feel bad because I feel like there’s a less-extreme survivor’s guilt. It’s like, ‘I’ve got this – but more people should have it – ugh, I don’t know what to do!’ I like working with local people instead of trying to outsource stuff. I’ve got a few features on an album that I’m working on, so that’s gonna be cool.

What are your goals and aspirations?

I’m working on my album, which is very cool. I’d like to work with more artists. Prior to this album I’m working on, I’ve not really done a lot of features. I had the great experience of being on Loraine James’s album recently; they’re quite established and they’re respected in that field. So that was really great because I got to be involved and tag along for the ride and had a couple of major magazines mention the song that we did on the album.

I also love the visual part of things like getting styled and made up and making videos. I do kind of want to start a label as well, but so it’s been too hectic. That’s more of a long-term goal.