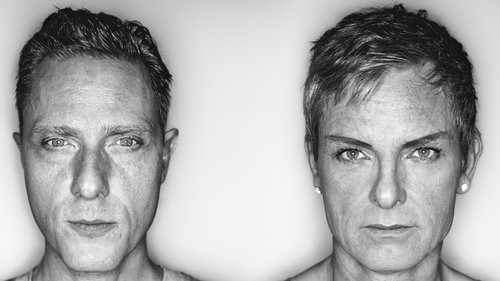 Do you still spend most of your time in Iceland?  On the ground level, what’s the electronic music scene like there at the moment?

Yes we both live in Iceland, however 2018 was very busy with tours following the release of our album “Lies are more flexible” so when we came home it was always for a short period of time, so we did not get much time to relax and root ourselves.  We had some gigs in the UK last week but now we can relax a bit before the summer, so it’s the perfect time to start working on the new album. The electronic scene in Iceland is not very big, but it’s very nice. You should check out the new Bjarki album, “Happy Earthday.”

What do you do to keep the Gusgus sound evolving?

You could say that the changes in lead vocalist have pushed the band to explore different genres. The band started in the 90’s, experimenting with ambient breaks and influenced pop music, we were labelled as triphop when we released worldwide in 97. After the second album in ‘99 the lead singer Daníel Ágúst quit and with the rest of the singers also departing from the band, we went through a reinvention of sorts. The singer Earth joined the collective and we started experimenting with more programmed drums and synthesizers, dropping the same heavy sampling that we did in the 90’s.  It came out as 80’s and Northern Soul influenced club pop music. Then when Earth left at the end of 2007, Daníel came back and we decided that it was time to explore something more techno inspired, especially as there were such great techno vibes coming from Germany at the time that we loved. It was then that we realised that we could actually do whatever we pleased, mixing up genres from past and present without any prescription of how Gusgus should sound. Being skilled at experimenting with programming synth stuff on my Modularsynth collection has of course helped, especially creating our own percussion template, which has given our beats their own identity.

How’s the Oroom label going?  Any plans to release music from other artists on it?

Lets see, for now we are just releasing our own music on the label, however there are some collaborations in the making so perhaps some of those will be released on Oroom.

You’ve worked with lots of other labels in the past, what were the important lessons you’ve taken from them that have helped with Oroom?

To have as much continuity with the releases as possible, without long silent gaps in-between, and no more waiting 5 years between albums.

What’s been your favourite remix of one of your tracks?

There have been many cool ones that come to mind, dating all the way back to the 90’s with the LFO and the 16b remix of ‘Believe’.  But I guess that the one Maceo Plex did for ‘Crossfade’ is on the top for me. After I heard the remix, I texted Mayer at Kompakt and said “you know you have a hit right?” I got back “yes”.

SOPHIE. That track ‘Is it cold in the water’ blows our minds.

You will have seen many changes to the electronic music world since Gusgus began in 1995.  What do you think is the most profound change so far and what do you predict for the future?

It is difficult to choose just one profound change that has occurred in electronic music since 1995, especially as ‘95 was up for grabs after the turmoil in the years that preceded it. Musicians are still working with the vibration from those years. I can however, name the vibe that caught me around 2004-2006 coming from Germany.  It was this dark slower melodic approach to techno music that hit me right through the heart. That track “Marathon Man” by Stephan Bodzin set a new standard of techno.

What’s your favourite piece of equipment, is there anything that’s stayed with you over the years that you can’t do without?

Well my old loved one is the Roland Juno 2, it was my first synth.  I got it in 1986 and it was the synth that I used for more or less all polyphonic synth sounds on the first 5 albums. For example, it is the organ in ‘Ladyshave’, piano and strings in ‘Call Of The Wild’, piano in ‘Moss’, bass in ‘Dance You Down’,

synth in ‘Purple’ and pads in ‘Anthem’.  My new loved one is the Roland Juno 106, the older sister. The stuff I can’t do without is the modular stuff. Sound creation and exploration is now such an important source of inspiration.

What’s next for Gusgus?

We’re still exploring new ways of mixing up genres on the new stuff we are working on for the next album and we’re also going deeper into the old new wave stuff for inspiration, blending it with what inspires us from today’s musical offerings.