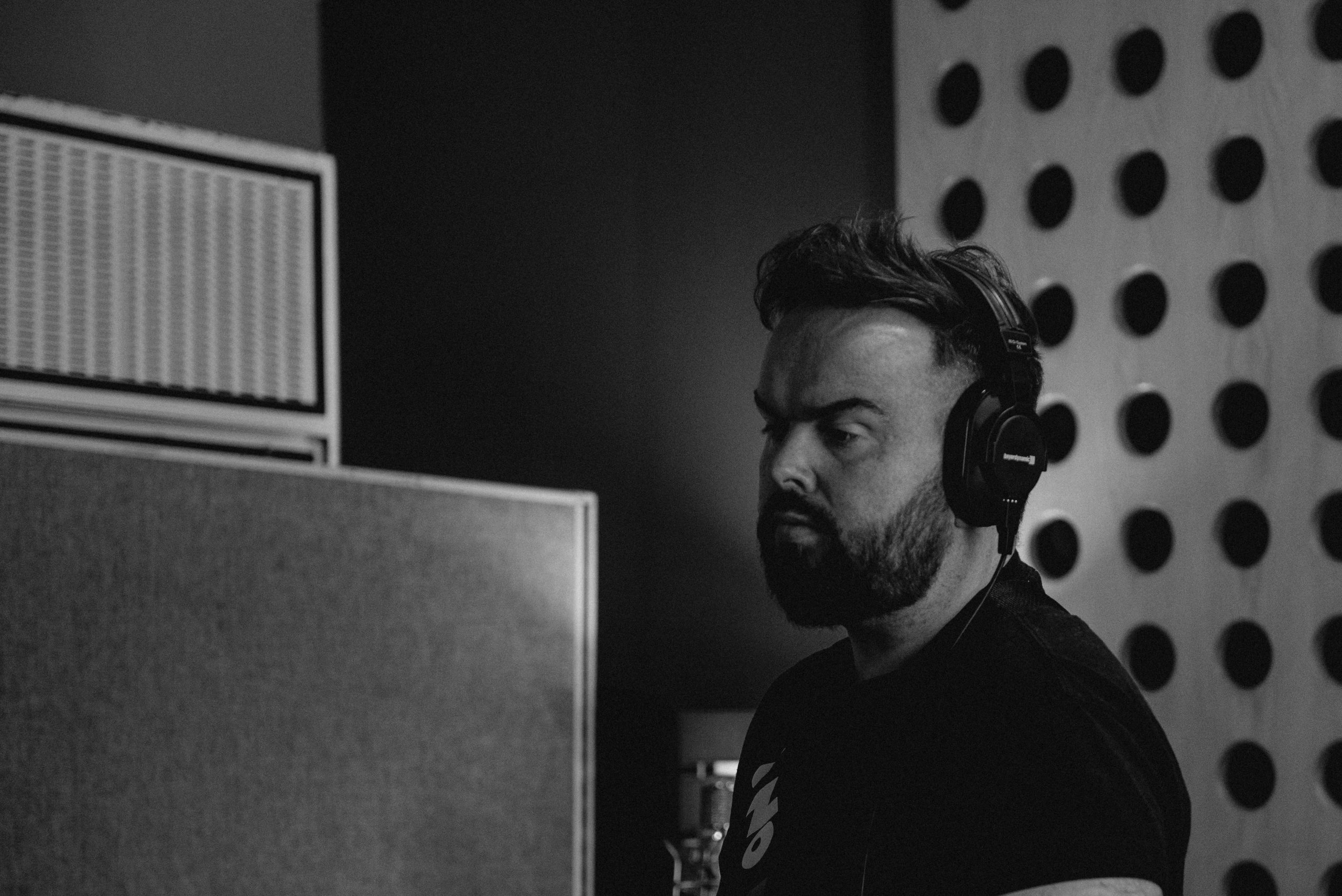 We all know live music is back, and with album cycles gearing up again, it feels as though things are moving forward. These are still precarious times, though. But thankfully, there is always music to play us through it, helping us to better understand what is happening around us.

SNACK caught up with David MacGregor from Broken Chanter to talk about teenage dreams, comfort zones, playing live and, of course, pop music.

You last spoke with SNACK in June 2019. Have you been up to much since?

Nah, just cutting about the house! That’s frightening. It feels like a long time, but equally, not long at all. I’ve lost the thread of time.

The first record came out and then four and a bit months into it, the campaign was truncated by the pandemic. I know the biggest tragedy of COVID-19 is hardly my album promotion stalling.

I did the same thing as everyone else, felt quite anxious, worrying about vulnerable relatives. But once you fold that into my everyday thread of anxiety, I had to think about what to do next. I started doing ambient and instrumental EPs, to make sure I was creating something. It was important to keep making music, and have people connecting with it.

Streaming shows wasn’t for me. One of the big things I like about live shows is the interaction. I did one for [Glasgow record label] Olive Grove and Tiny Changes, a very good cause, but after that, I sacked it off. I wasn’t interested in livestream shows as I didn’t think it was enjoyable for me, or presented myself in the best light for an audience.

How was the recording process for the new album?

At the end of August / start of September 2020, I started sending demos to Paul Savage, who produced the new record. We talked about doing the second Broken Chanter record together before the first one hit the shelves!

The first demos were called Shotgun 1 to 5 because Paul threatened me with getting his producer shotgun out, because I was procrastinating and hadn’t sent him anything.

What was great was the COVID restrictions eased, so we could go into [Broken Chanter and now also Franz Ferdinand’s drummer] Audrey Tait’s unit to practice. We were a few metres away from each other, working up the demos, and for the first 45 minutes a day, we’d just be chatting. It was the only social interaction we were getting outside of our households.

Were you more excited about the social aspect or working on the songs?

A little of both! As the album coming out seemed so far away at that point, and no one knew what was going to happen, the social side was really important.

Provisionally I had a tour in England lined up for November but after all that ‘Freedom Day’ patter, we moved it back to spring of 2022. When you look at the cases in England right now in mid-October, I think that was a good move.

I wasn’t comfortable taking other people across the border. If I want to cross the Tweed and catch coronavirus, that’s my prerogative, but I couldn’t ask that from my band.

It was great to work with Paul. I’ve been a big fan of Chemikal Underground since I was a teenager. I think the first thing I bought was the Fuck The Curfew EP by Mogwai. The idea that this was happening down the road from me was genuinely exciting.

It makes it real, doesn’t it, seeing local people do what you want to do?

Absolutely. It was quite inspiring, the DIY approach that Kid Canaveral [David’s former band] took. We weren’t very good at the start, but we got better. We thought, we can wait for others to release this, or we can do this ourselves. By the time we put the first release out on our label Straight To Video Records, we were competent musicians and much better songwriters.

That teenage interaction with Chemikal Underground, and going to those early Fence gigs, made us think there was no point in waiting. In those early days, we managed to plan and organise releases, and tours that broke even. Mainly by being canny about who we worked with and sleeping on floors or in hotels that don’t register on the star rating scale, but we decided to do it ourselves until someone bigger or more competent did it for us.

I’m often told I don’t sell myself enough, and I think there’s maybe a West Coast of Scotland attitude about how you shouldn’t get ideas above your station. I love Glasgow, but there’s almost an invisible hand on your shoulder saying, ‘don’t get too wide.’ That’s not from my upbringing, it’s just self-promotion doesn’t necessarily come naturally to many people from the central belt of Scotland.

I’m trying to say I am proud of it, this is really good, please listen to it. I’m not saying I’m the world’s greatest musician, as that is easy to prove otherwise. But it’s a great record!

It’s a pop record; it’s less introspective than the first Broken Chanter record. I love that record, I loved making it, it’s a great album, and I pushed myself out of my comfort zone on it. I’m very proud of it. It was melancholic because, while we never announced it at the time, I knew Kid Canaveral was over. Deep down, we knew it was over but didn’t want to say, perhaps to soften the blow, so there was a sadness to it.

With Catastrophe Hits, I knew it was going to come out at a time when people were out and about more. I wasn’t going to release it until that was the case, and I didn’t want a record entirely reflecting on the pandemic. There will be a time to relive all that, but it’s not now. It’s still happening. It would be hopelessly self-indulgent to be so inward-looking again with everything that’s going on. It’s not all nihilism; there is hope on there. We need to organise and kick back against the calamity and cruelty being dished out by disaster capitalists and sociopathic populists the world over.

Both of the leading singles have been musically upbeat and poppy – do you think they’re representative of the album as a whole?

Definitely. There is more upbeat stuff on there, but there’s also atmospheric and electronic stuff. I’ve not abandoned the sound from the first album; I’ve developed it and focused the electronic stuff to the songs I used to write in the past. I like songs that are upbeat on the surface, but the lyrics make you think ‘I hope that singer is getting the help they clearly need’.

There’s nothing wrong with pop music. I’ve always described the music I make as pop music to some degree. It would be disingenuous to say I was making music that I wouldn’t be bothered if nobody heard.

You’ve played a few live sets recently. How have they been?

Good, yeah. I was quite nervous, to be honest. The first gig back was supporting Poster Paints in The Poetry Club in Glasgow. That’s a wee venue and it was sold out. 120 people. I was a bit apprehensive having that many people in the same space as me during a pandemic, never mind playing in front of them!

It was 20 months between shows for me and I was thinking, ‘can I still do this?’ Of course, when the first song was over, I’d had a bit of daft patter with the audience, and it was great. I loved every minute of it, and it was so good to be on the stage. I’ve played the CCA recently too, and you feel the rust falling off.

You’ve got Edinburgh and Glasgow shows in November. All set for them?

I can’t wait for these shows –  they’ll be a full six-piece band set. I can’t wait to make that much noise in public again. We’ve been rehearsing for some time; it takes a bit of work to coordinate diaries! It’s been a good laugh. We work well together, but we’re all mates too.

Any local or newish bands on your radar at the moment?

I loved Poster Paints. Si Liddell and Carla J Easton are lovely folk whose music I admire. They’ve put together a great band, and for my first gig back, that was a really nice show.

The Man of The Minch album, that’s a glorious, shimmering pop record.

I must admit, when I’m preparing for a record coming out, I become really myopic, focusing on that.

I want to have nervous exhaustion by April! There’s a lot of lost time to make up.

I can’t wait to play the Irvine gig. It’s been rescheduled three or four times, so fair play to them for persevering. We will get on that stage in front of the good people of Irvine!

Then in February, I’ll be in England and Wales, and that tour will continue with more Scottish shows in April. After that, there will be solo or duo shows in the Highlands and islands of Scotland. I’m keen to get out of the central belt and play shows around the country. I really love playing in smaller, odder venues across the UK that other people consider out of the way. How can something be out of the way if folk live there?